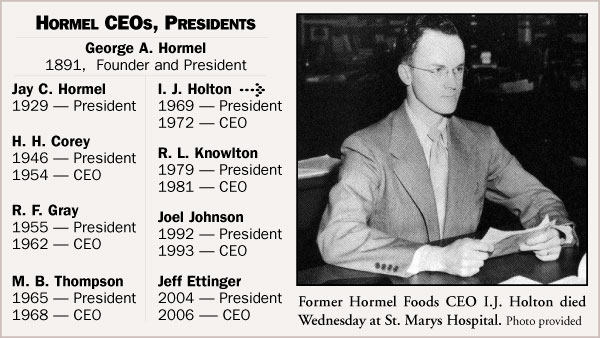 Hormel Foods Corp. first hired I.J. Holton in 1947. Only months before, the name “Hormel” was a foreign term to him.

“I happened to be a chili eater and loved it but never paid any attention to the manufacturer,” he said to a Herald reporter in 1995. A fellow law school student had recommended he look into a job with the company. Holton followed through and was invited to an interview in Austin. 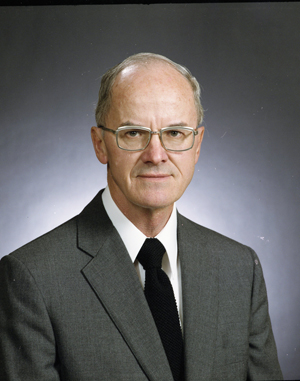 It was the beginning of his 36 years with Hormel, a stretch of time that would render him a legend in Austin and a leader to the company, as president from 1969-1979 and CEO from 1972-1981. Holton, 92, died Wednesday, April 12, at his Austin home after a stay at St. Marys Hospital in Rochester.

Ira James Holton was born Aug. 16, 1919 to Ed Mabel Holton in Cedar Rapids, Iowa. After graduating from high school, he attended the University of Iowa. He graduated in 1941 with a bachelor of arts degree and a Phi Beta Kappa key, according to a company biography at Hormel.

Holton then entered the Army, according to the company biography, where he served as an infantry private and participated in the Normandy invasion. He was later promoted to major.

After his military service, Holton went to law school at the University of Iowa. The university’s Alumni Association said in a profile Holton had trouble getting financial aid during law school. This would later motivate him to donate scholarships and arrange for financial aid for students.

“I enjoy doing it and get a good feeling from it,” he later said. “I remember so clearly how I needed scholarships when I was going to school.”

Fresh out of law school at Iowa, Holton had originally intended to be a teacher there. He took the job at Hormel instead, deciding to get a few years’ experience first.

“They piled up so much work on me when I got [to Hormel], I could never catch up so I could leave,” he said to the Herald.

Holton had a strong worth ethic, based on the notion that no single person could define the success of any company.

“I wanted to accomplish each task with all of the talent and energy I could bring to it and create an atmosphere where everyone could work in dignity,” he said of his goals at Hormel. Over the years, he worked in many positions with the company, including staff attorney, corporate secretary and president.

Despite how many roles he played at the company, Holton remained modest about his work.

“I have a good feeling about the illusion that I’m being helpful,” he said. Holton saw many changes and innovations in the company, including the beginning of construction of a new Hormel plant in 1979.

“He had a very dry wit and a well-developed sense of irony,” said his daughter, Janet Holton. “He was a man who would sit back and assess the situation carefully before making a move.”

Holton officially retired from Hormel in 1983 with fond memories of the company and his coworkers.

“I’ll admit that it’s an unusually fine company,” he said. “It’s been a joy for me to work in a company like that and with people like that.”

Hormel’s current CEO and President Jeff Ettinger said he was a great leader and even better person.

“He had the ability to connect with so many people,” Ettinger said in a statement Thursday. “His leadership helped Hormel Foods grow both domestically and internationally and laid the groundwork for the company we are today. He will be truly missed.”

“My wife over the years always said that [Hormel] was our biggest child because it was getting most of my attention,” he said in 1995.

In addition to Holton’s oldest daughter Janet, he had another daughter, Ann Paparella, and a son, Brooks Holton.

Janet said on nice days she would ride her bike home from school and Holton would return from work.

“We would all have lunch together and chat about how the day was going,” she said. On nights with good weather, Holton would round up the neighborhood kids and take them to A&W for a root beer and some popcorn, she said.

Holton’s wife, Adelaide, preceded him in death. For a while she was very sick, and Holton would take care of her at their home, Janet said. When Adelaide could no longer stay at home, Holton paid her frequent visits in the hospital.

“He would go out to visit her twice a day,” she said. “You could set your watch by it.”

Holton was a voracious reader, Janet said. Starting in 1960, he began keeping a list of all the books he read each year. This continued almost until the day he died.

Even after his retirement, Holton and a group of other Hormel veterans would still gather once a week in Austin, he told the Herald. He valued the sense of identity he had in the city and how many people would greet him by his nickname, “Jim,” when he walked down the street.

Holton lived in Austin from 1947 through the end of his life. Arrangements for Holton’s funeral are pending with Clasen-Jordan Mortuary.