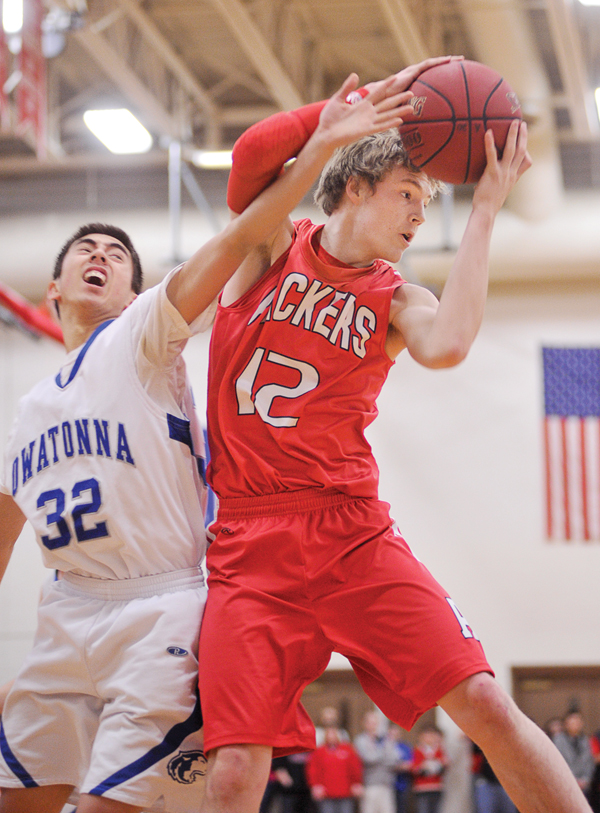 The Packers had an answer for everything the Huskies brought as they led from wire-to-wire in a 61-52 win that locked up an outright Big Nine Conference boys basketball title in Packer Gym Friday. 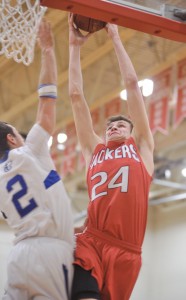 Austin's Tom Aase goes strong to the hoop against Owatonna's Taylor Phelps during the first half of Austin's regular season finale in Packer Gym. - Eric Johnson/photodesk@austindailyherald.com

“I’m really proud of the kids,” Austin head coach Kris Fadness said. “They deserved it and they worked really hard. We had that bad loss at Mayo (Dec. 16) and then we had the loss at Owatonna (Jan. 27) when we led a lot of the game. We said right there we’ve got to take care of business the rest of the way and our guys did what they had to do.”

After Austin (20-5 overall, 16-2 Big Nine) built up a 10-point lead in the first half, the Huskies came out firing as Drew Osmundson and Ryan Emanuelson hit back-to-back threes to pull within 33-29 and Emanuelson added another three to make it 34-32 with 16:59 left in the game.

But as they have all season, the Packers responded as Joe Aase, who scored 15 points, drilled a three and that ignited an 8-1 Austin run. Owatonna (20-6 overall, 14-4 Big Nine) never got closer than five the rest of the way.

“Basketball is a game of runs and we had two or three big ones,” said Austin point guard Zach Wessels, who finished with 12 points, four rebounds and three assists. “It’s one step closer to state if we get there. It feels pretty good, especially against Owatonna.”

Austin forward Tom Aase had his fingerprints all over the victory for the Packers, who are ranked No. 5 in Class ‘AAA.’ He blocked a three-point shot by Quentin Smith into the crowd that landed just above Owatonna’s bench with 32.3 seconds left in the game, he had one-third of Austin’s total rebounds, and he also spent some time bringing the ball up the floor.

“They were trying to take Wessels out of the game, but some other guys had to step up,” said Aase, who finished with 18 points, 10 rebounds, three assists, three steals and four blocks. “This is a great team win and everybody did their part. We totally should of won the first game (against Owatonna), but we did it tonight and we’re the Big Nine champs.”

Aase had just three points in the first meeting against the Huskies and senior guard Goliath Oboyo also showed improvement as he finished with eight points after being held scoreless in the team’s first meeting with Owatonna.

“He was just a man out there. He was dominant. Tom brought it tonight,” Fadness said. “Oboyo would be the first one tell you he was disastrous at Owatonna. He made plays tonight and to watch the growth of him over the last few years has been real fun.” 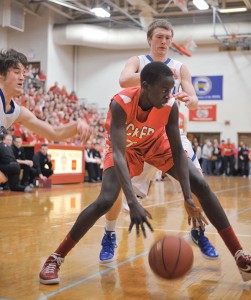 Austin's Goliath Oboyo works inside against Owatonna in the first half Friday night in Packer Gym. - Eric Johnson/photodesk@austindailyherald.com

The game looked to be in control for Austin late in the second half when the Huskies picked up two technical fouls in a span of three minutes. Austin took advantage and built its lead up to 55-43 over that span.

“They were getting frustrated, but we each had to play our game so it was fine,” Wessels said. “It feels good (to see them like that). We thought coming in we were the better team and we proved it today.”

The Big Nine title is Austin’s first since 1999.

The Packers will enter the Section 1AAA tournament as the No. 1 seed and will host No. 8 Faribault Wednesday at 7 p.m.