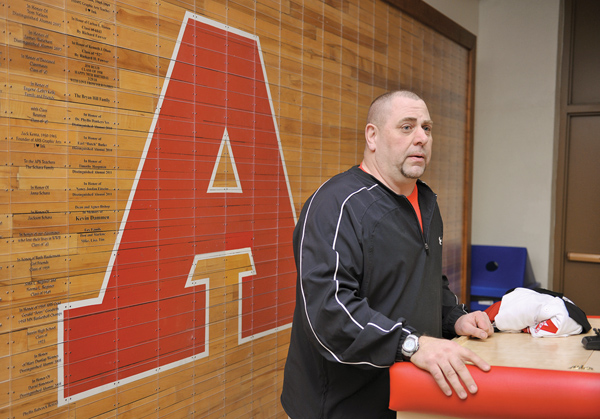 Austin’s new football coach Brett Vesel made a trip to Austin to meet parents and players and his first priority is quite simple: the team needs to start lifting weights. 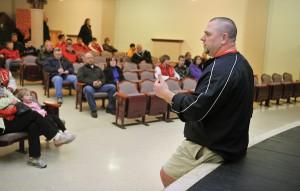 Vesel, who said he plans to hire his assistant coaches by early this summer, said his first order of business lies with his players.

“The first thing we’re going to do is get a strength and speed program installed. I think that’s the most important thing I can do with the kids,” he said.

Gabe Gerstner, who started on defense for the Packers, said he’s impressed with what Vesel brings and hopes it’s the start of a new era.

“I think Austin is dying for a win,” he said. “Winning in the playoffs would be great, but we’ve got to get that first win first. This coach can help us do that. I really liked him and he knows what he’s doing. We haven’t always been the most organized group, and he’s already got a plan on how he wants things to go.”

Austin sophomore Bret Lukes, who started at safety and played wide receiver this past fall, said the team is looking forward to working with Vesel.

“A lot of us are already in the weight room,” he said. “We’re excited to get into his program and see what it is. We’ve got some talent in our class and I hope we continue to get better and get some wins.”

The Packers are coming off two winless seasons and have lost 19 in a row, but Vesel isn’t worried about that. He’s going to bring in his system, which was successful at La Crescent, where he coached for the past six years.

Vesel added that he wants his team to play fast and he wants to wear opponents out.

Brad Lukes, who is Bret Lukes’ dad, was pleased with what he saw from the Packers’ new coach.

“He brings a lot of excitement and experience to Austin,” said Brad Lukes, who played football for the Packers when he attended AHS. “It’s going to be a good thing for Packer football. We need someone who’s going to be seen in the weight room, and he was in charge of the weight lifting program at La Crescent.”

Vicki Gerstner, mother of sophomore linebacker Gabe Gerstner, said she hopes Vesel’s hiring brings some kids back to the game. She noted that some of the current sophomores who played as freshman weren’t out for the team this year and she hopes that changes this fall.

“I thought (Vesel) seemed very knowledgeable and he has a good track record,” she said. “I’m excited for our boys to learn from him. We’re hoping some players will come back next season because of him.”

Vesel played middle school football before switching to hockey and basketball when he got to high school. When he got to University of Wisconsin-Superior, he played football for four years. He was going to be an assistant coach at UWS, but the former coach was let go.

Eventually, Vesel got into coaching at the high school level.

He said he has turned around losing programs before and he’s not worried about the fact that the Packers haven’t won in two years.

“I’m excited about the game and I think that will wear on the players,” he said. “I think kids have a short memory. The ones who are coming in as freshmen, I don’t even know if they know how the team did last year. I’ve turned teams around before, and I’m really excited about doing it. It really doesn’t matter what they ran before. We’re going to make our system work for the kids we have.”

While Vesel is unsure if the Packers will keep the Midnight Madness tradition alive, he said the team will likely hold a summer camp and attend a team camp.

Vesel, who will also teach at Austin, will finish out the school year at La Crescent before coming to town.