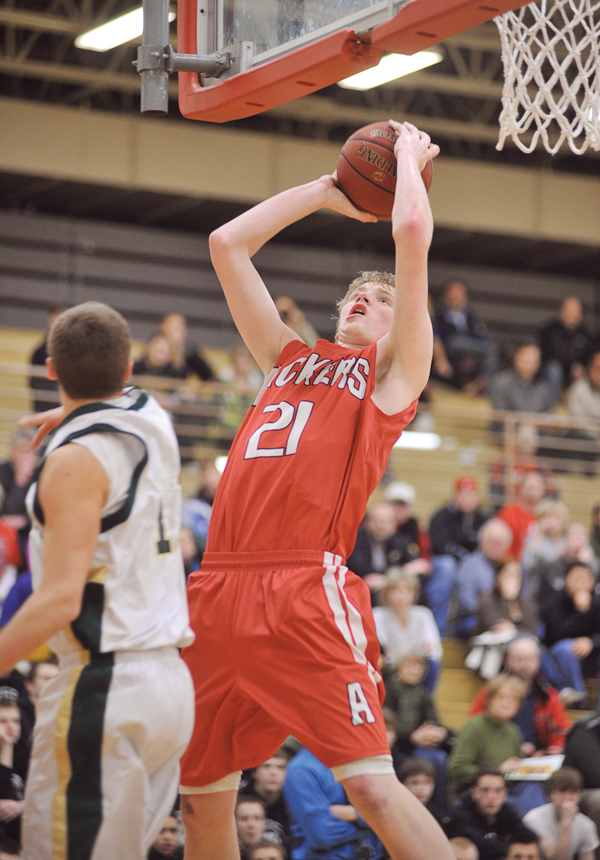 Austin's Joe Aase shoots strong inside during the first half against Rochester Mayo Friday night in Packer Gym. - Eric Johnson/photodesk@austindailyherald.com

On Friday, there was no chance of a heartbreak as the Packers steamrolled the Spartans 78-47 in Packer Gym. 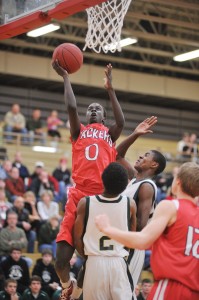 Austin's Goliath Oboyo goes up against Rochester Mayo in the first half Friday night in Packer Gym. - Eric Johnson/photodesk@austindailyherald.com

“We’re a lot different team than we were at the start of the season,” said Austin center Joe Aase, who finished with 28 points, five rebounds and two blocked shots.

Austin (13-4 overall, 10-2 Big Nine) went on a scoring frenzy in the first half as it jumped out to a 10-0 lead in the first three minutes, which prompted two early timeouts from the Spartans.

Mayo got as close as 12-7 before the Packers rattled off a 16-0 run over five minutes that was started and ended on threes by Joe Aase.

“The first half was about as well as we’ve played all season. We were running, we were gunning and we were flying all over defensively,” Austin head coach Kris Fadness said. “Joe’s really playing at a high level right now, (Zach) Wessels is really pushing the tempo and everyone else is doing their part and making plays when they need to.”

Mayo’s Ian Hatthaway scored the next four points, but Wessels and Tom Aase teamed up to create the most exciting 10 seconds of Austin’s season. Tom Aase got the crowd going when he threw down a two-handed dunk off a lob pass from Wessels out of the set offense and Wessels, who had 10 points, six steals and six assists, stole the ensuing in-bounds pass and scored while drawing a foul.

While Wessels’ free throw missed, Tom Aase ran down the loose ball on the baseline, where he drove and threw down a two-handed dunk over a Mayo defender to make it 36-11 with five minutes left in the game.

Tom Aase, who finished with 16 points, six rebounds and three blocked shots, hadn’t dunked in a game before in his career, but now he can say he’s dunked twice in 10 seconds.

“I’ve missed a few dunks before, but I never got one until tonight” Tom Aase said. “After I got the first one, I thought why not go for broke on the second one? It was incredible.”

Austin shooting guard Goliath Oboyo, who had seven points and seven assists, said he’d been trying to get Tom Aase to go up and dunk this season. 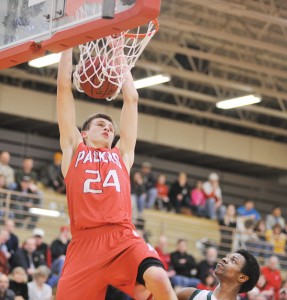 Austin's Tom Aase dunks off a pass from Zach Wessels in the first half against Rochester Mayo Friday night in Packer Gym. - Eric Johnson/photodesk@austindailyherald.com

“I told Tom before the game to bring out the tiger and get’em and that’s what he did today,” Oboyo said. “We all trust each other and whoever’s got the ball in their hands can score.”

The Packers will play at Minneapolis Washburn (13-2 overall) Saturday at 2:30 p.m.

“We’ve got to keep playing at this level and Washburn’s one of the best teams in the state in our class,” Fadness said.