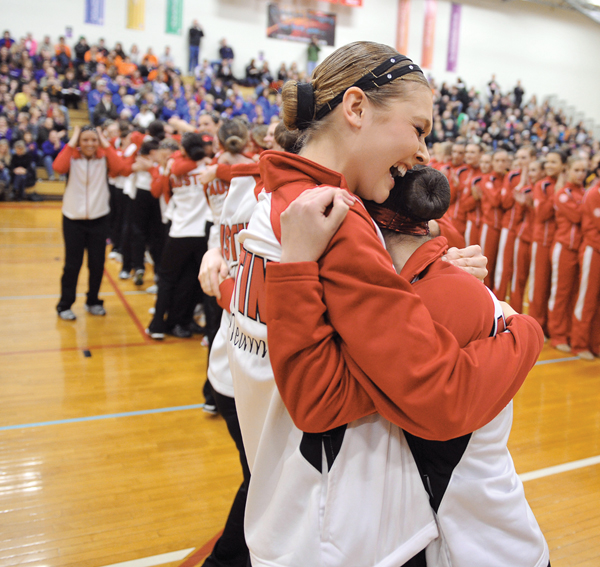 Austin's McKenzie Besel hugs Hanna Bergstrom as the Packers dance team celebrates their third place finish and a trip to the Minnesota State Meet next weeked at the Target Center in Minneapolis. - Eric Johnson/photodesk@austindailyherald.com

The Packers grabbed the last ticket to state as they took third in the high kick as Faribault took second and Chaska took first. The Packers had to edge out Benilde-St. Margarets and Holy Angels to get to back to state.

“There were so many teams that deserved to go to state that had beat us before and they didn’t go,” Austin senior Jaclyn Bird said. “It was tense, but we were confident and we knew we worked really hard. Going into (the awards ceremony), we had no idea (if we were going to state).” 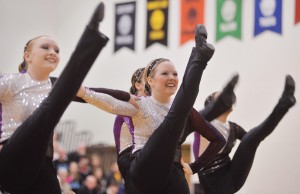 Austin junior McKenzie Besel will be making her first appearance at the Class ‘AA’ state dance meet, which takes place in Target Center next Saturday, and she couldn’t feel much better about it.

“I am ecstatic, I have never felt this way and I’m overjoyed,” she said. “It is just a great feeling to know that we’re one of the best teams in the state and it’ll be a great time.”

“I’m really happy with how they performed,” Austin head coach Jen Sims said. “We had an incredible section with some amazing teams. We had a very high energy and strong kick performance and in jazz we had a few minor bobbles. In this section you can’t have any of those bobbles and make it to the top three.”

Besel said the day was a little nerve-racking, especially waiting for the results. But no matter what the result was, the Packers had given it their all.

“We knew we put everything out there that we had and we knew it was out of our control and we did the best we could do,” she said. “Our team has really bonded really well this season and we had an inner connection and confidence in each other.”

Hayfield grad Leslie Wilson tied a career-high with 25 points for the Wartburg women’s basketball team as the Knights (17-6... read more