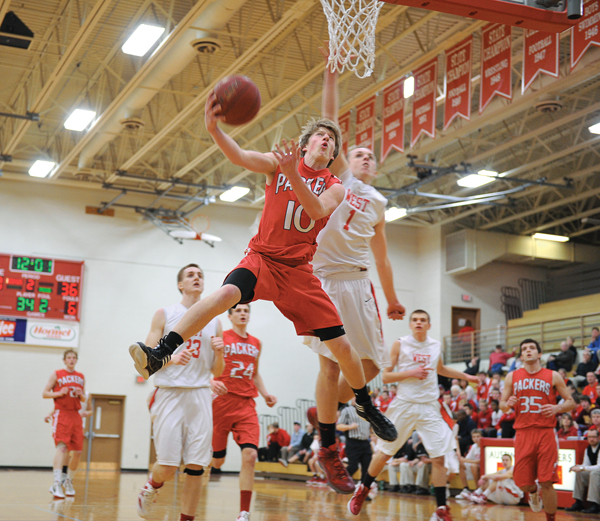 Austin's Brett Lukes tries to scoop a shot underneath off a break against Mankato West in the second half Thursday night in Packer Gym. - Eric Johnson/photodesk@austindailyherald.com

It wasn’t their most efficient offensive night, but the Packers managed to stay unbeaten at home when they rattled off a 72-60 win over Mankato West in a boys basketball game in Packer Gym Thursday. 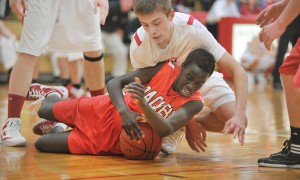 Goliath Oboyo hits the floor to control a loose ball against Mankato West in the first half Thursday night in Packer Gym. - Eric Johnson/photodesk@austindailyherald.com

“We had a good five minute run on offense, where we were just knocking shots down,” said Austin sophomore point guard Zach Wessels, who had 22 points, five steals and three rebounds. “But we didn’t come out and run a good offense for most of the game. We had our heads down dribbling and we needed to pass the ball more.”

The Scarlets (7-13 overall, 4-9 Big Nine) pulled to within 46-36 early in the second half, but the Packers responded with a 10-0 run that saw Lukes hit four free throws.“I thought Bret did some nice things out there tonight,” Austin head coach Kris Fadness said. “But we just weren’t real crisp on offense and it hasn’t been a good week practice-wise. Thankfully we got them to turn it over a lot and defensively we made some plays.”

West stayed in the game by knocking down 8-of-12 threes, but Austin’s defense kept the Scarlets out of the paint. Tom Aase, who was limited in minutes in the first half, blocked four shots in the second half and Joe Aase had three block shots.

“They had some big blocks back there. They’re a force down low and it’s nice,” Wessels said. 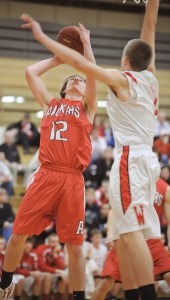 Austin senior Goliath Oboyo gave the Packers a boost in the first half as he finished with with six points, six steals and seven rebounds.

Packer boys fall to No. 3 Washburn

MINNEAPOLIS — The No. 8 ranked Packer boys basketball team hung with No. 3 ranked Minneapolis Washburn for much of... read more