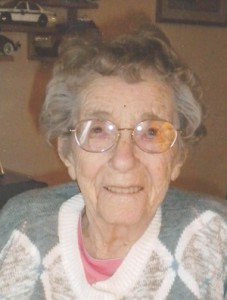 Naomi (VanRiper Meier) Friedrich, 102, passed away peacefully at her home at the Cedars of Austin on Feb. 2, 2012.

Naomi was born in Aredale, Iowa, on July 29, 1909. She attended school in Sargeant and Anoka. Naomi married Ralph Meier on Aug. 18, 1926. They had three sons: Eldred, Dallas and Myron. They lived in Brownsdale and Austin, then moved to northern Minnesota, primarily Grand Rapids. They moved back to Brownsdale in 1966 to be closer to family. Ralph passed away in 1972.

Naomi married Gustaf Friedrich in 1977 and they lived in Brownsdale until they moved to Austin in 1996. Gus passed away in 2004.

Naomi was active in the various churches she belonged to, most recently Grace Lutheran Church in Austin. She was also active in the Fraternal Order of the Eagles, serving as president of the Grand Rapids Aerie Auxiliary in the early 1960’s.

She enjoyed her contacts with people as a retail sales person and school aide. She also enjoyed quilting, knitting and crocheting.

Arrangements are being entrusted to Clasen-Jordan Mortuary. The family is planning a celebration of Naomi’s life in the spring.