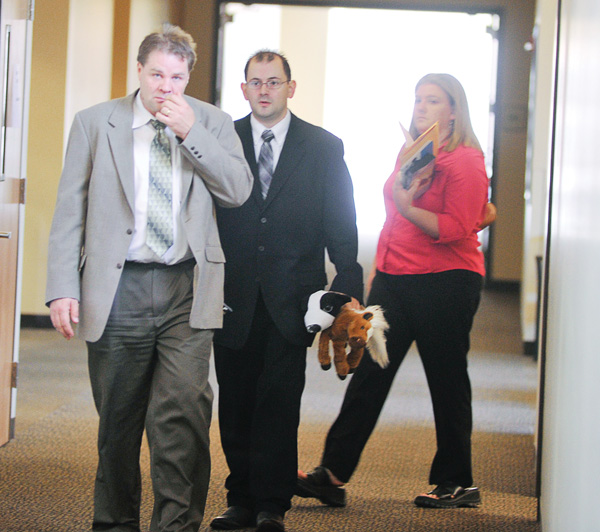 Brian and Charity Miller, seen in this June file photo, will be back in court again Monday to determine parental rights. - Herald file photo

The Dexter parents who chained their now 6-year-old son to his crib will defend their parental rights from Mower County Human Services for the second time this Monday.

Brian and Charity Miller, 34 and 27, will be in court at 9 a.m. Monday at the Mower County Jail and Justice Center. They face a second attempt from MCHS officials to terminate their parental rights.

The Millers were sentenced in July to one year in jail on one count each of gross misdemeanor false imprisonment and one count each of malicious punishment. The Millers received credit for time served and participated in the sentence to service program, which reduced their required time in jail.

Although the couple can now return home, they still do not have custody of their two children, ages 6 and 8. The boys are in foster care under MCHS.

District Judge Fred Wellmann ruled in June the Millers had caused egregious harm to their children but could retain their parental rights if they completed a case plan to reunify their family pursuant to the Indian Child Welfare Act, as Charity and one of the two sons are members of the Cherokee Tribe.

MCHS claims the parents have not done enough to reunify their family and should have their rights permanently terminated.

—Amanda Lillie contributed to this report

Sen. Amy Klobuchar, pictured with Austin Packaging owner Jim Heimark, visited the plant as part of her Made in America... read more