Kenneth Marvin Russell, 89, of Austin, died Monday, Jan. 30, 2012, at the Cedars of Austin after a prolonged illness. 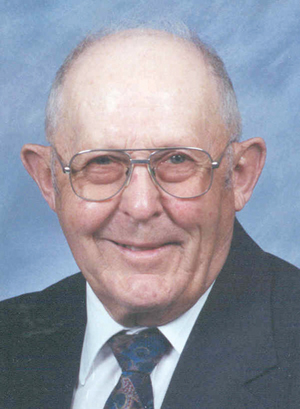 Kenneth was born Aug. 20, 1922, in Garfield, Minn., Douglas County, to Marvin Daniel and Elsie (Johnson) Russell. He attended grammar school in Garfield and graduated from Alexandria High School. After graduation, he farmed with his father in Ida Township and was employed at the North American Creamery in Alexandria.

Kenneth married Florence Brede on Sept. 19, 1944, at St. John’s Lutheran Church in Garfield. In 1950, they moved to Austin where Kenneth was employed at the Golden Dairy until 1970. In 1970 the family moved to Centralia, Ill., where Ken secured a position with Hollywood Brand Candy Company. He returned to Austin in 1973 where he became self employed as a bulk milk hauler. After his formal retirement, he continued as the courtesy car driver for Austin Ford.

Kenneth was a longtime member of St. John’s Lutheran Church in Austin where he held a variety of offices in the church. He enjoyed many activities including bowling, woodworking, fishing and traveling. Ken particularly enjoyed returning to Lake Ida near Garfield for vacations each summer.

He is preceded in death by his parents; wife, Florence; sister, Fernyne.

The Celebration of Kenneth’s life will be held 11 a.m. Monday, Feb. 6, 2012, at St. John’s Lutheran Church with Pastor Tom Ogilvie officiating. Friends may call from 2 to 4 p.m. Sunday at Mayer Funeral Home and also one hour before the service at the church on Monday. Interment will be in Grandview Cemetery.