Joyce Paulson Staples, 94, was peacefully taken to heaven Dec. 8, 2011, in Greenville, S.C., in the home she had shared with her daughter and son-in-law, Beth (Staples) and Warren French, since she left Austin in 2002. 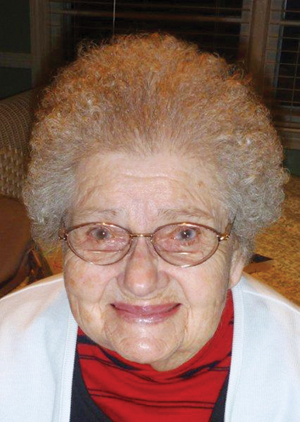 Daughter of Matilda (Jensen) Paulson and William G Paulson, she grew up on their family farm in Blooming Prairie, Minn., where she was born on June 23, 1917. She was a graduate of Blooming Prairie High School and continued her education at Moody Bible Institute in Chicago.

In November of 1947 she was united in marriage to Warren A Staples, and the couple made their home in Austin where their three children were born and reared. Following Warren’s death in April, 1978, Joyce spent her next 24 years in Austin — continuing to garden, sew and volunteer at First Baptist Church, Grace Baptist Church and Burr Oak Manor. She was a woman of faith. She loved children, and throughout her life she devoted her teaching skills to Sunday school, VBS and Child Evangelism clubs. She also had a heart for missions expressed by the hundreds of clothing items she created for children around the world with her home sewing machine. For more than 25 years she was a Border Missions volunteer while wintering in McAllen, Texas.

Joyce was preceded in death by her two siblings: Victoria (Lightly) Lee and Wilford G Paulson.

A memorial Service in celebration of her life will be 2:00 p.m., Saturday, Feb. 18, at Grace Baptist Church in Austin, Minn., with Pastor Brett Williams and Pastor Warren French Jr. officiating. The family will receive friends from 1 p.m. until service time in the church parlor. Memorials are preferred to missionaries Jim and Julie [Hansen]Leonard, Brazil; and Steve and Sarah [Lightly] Caton, England, both nieces of the deceased, in care of Grace Baptist Church, 100 Fourth Ave. SE, Austin, 55912.