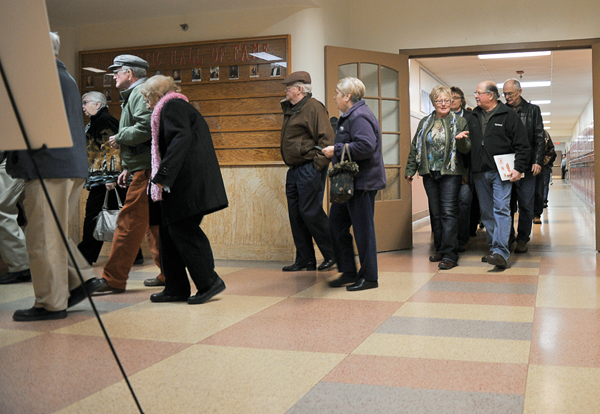 As Hormel Foods Corp. looks to 2012, its executives have their sights locked on the Hispanic market.

“Every time I hear (about the Hispanic population increase), I get very excited about the growth prospects of MegaMex,” Splinter said at the meeting in Austin High School’s Knowlton Auditorium. 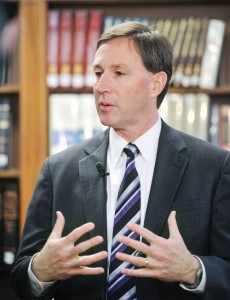 “MegaMex provides a platform that’s really the only one in the United States that has this depth and cross section of products,” Hormel president and CEO Jeff Ettinger said in a press conference before the meeting. “We’ve been involved in ethnic food for about the last 15 years, but we’ve really chosen to focus our energy on Mexican food because the cuisine is so popular here in the United States.”

Ettinger spoke at the meeting about Hormel’s steady growth since 2006 — the year he became CEO — and how one segment or another has “picked up the slack” for others, and he sees MegaMex as the breadwinner of the future.

“Our team had another outstanding year,” Ettinger said. “I’m very excited about the overall results.”

Ettinger credited Hormel’s strong fiscal 2011 to marketing programs and advertising for its traditional product lines, some “innovative new items” such as the Pepperoni Minis, and Hormel’s recent acquisitions.

“We’re very proud that the team has been able to work through a difficult environment in terms of the overall economy, and yet still continue to grow our business,” Ettinger said.

An anniversary and an open house

This year marks the 75th anniversary of Hormel’s iconic Spam, and the company looks to mark that milestone in style.

Ettinger announced Tuesday that Hormel will celebrate the canned luncheon meat — along with the completion of its corporate office expansion — with an open house on July 28.

“That will be an event we’re really looking forward to,” Ettinger said.

Ettinger said the company continues to see growth for Spam in the U.S. and internationally, and they have a friendly rivalry between the domestic team and the international team to see who can end up with the most sales.

“It’s pretty even right now,” Ettinger said. “Spam is our largest franchise outside the United States. … and the 75th anniversary will certainly put more energy behind that great brand.”

As Spam’s 75th anniversary approaches, Hormel will launch a series of humorous TV advertisements, two of which premiered at the meeting. Hormel showed off 10 ads, including two domestic and one Asian market Spam ads, and two domestic and one Spanish language MegaMex ads. Hormel spent $115.3 in advertising in fiscal 2011 and plans to continue a similar plan in 2012.

Ettinger said in early March they hope to wrap up the 28,000-square-foot expansion, the first for Hormel corporate in more than 20 years.

“We’re really excited to see it completed,” he said.

Spammy and the fight against hunger

Ettinger also touted the company’s 2011 launch of Spammy, a vitamin-fortified, nutritional turkey spread to fight hunger in Guatemala, and other hunger relief efforts throughout the United States.

Hormel announced at the meeting it distributed over 1 million cans of Spammy to children in Guatemala last year, a note that was met with a rousing applause from attendees.

“We were surprised and pleased how well the product went into the local diet, so anecdotally we’re hearing just great results from their teachers and parents and the kids themselves,” Ettinger said.

Hormel also donated over $5 million to hunger relief in the United States last year, including $110,000 to local hunger-relief organizations in 16 communities where it has manufacturing facilities.

Not everyone attending Tuesday’s meeting was there to applaud Hormel’s plans and accomplishments. A representative with the Humane Society of the United States spoke on behalf of the organization’s concern with Hormel’s use of gestation crates for hogs. The use of the crates, which do not allow for a pig to turn around, have been banned in seven states. The Humane Society representative asked Ettinger when Hormel would begin to move away from the practice, as many of its large corporate meat producing competitors have.

“We’re comfortable with our position and having that consistent approach going forward,” he said at the press conference about phasing out all gestation crates.

Also during the question and answer portion, Rod Huinker, of Austin, who said he was attending his 24th consecutive shareholders meeting, spoke about the 1985 Hormel strike and how 50 workers, including himself, still haven’t gotten their jobs back.

Ettinger responded that while he wasn’t at Hormel at the time, he has the greatest respect for then-CEO Richard Knowlton and the leaders who were managing the company, and he has the highest confidence they made the decisions they thought were right. He also said while he can’t revisit it over 25 years later, he has great respect for the workers and what they contributed.