Drought may persist through spring 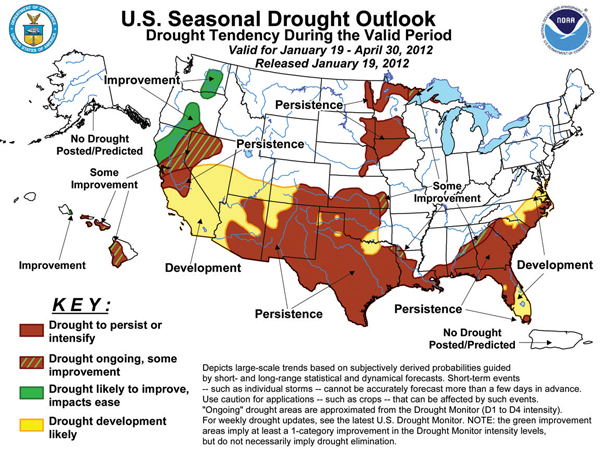 Source: National Oceanic and Atmospheric Administration and Department of Commerce.

Melting snow, sloppy roads and an unusually warm winter aren’t telling the true story; much of Minnesota is in the midst of a severe drought.

“It’s just a totally different thing,” said Jeff Boyne, meteorologist with the National Weather Service in La Crosse, Wis. “Last year we had about five inches of water in the snow pack.”

Now, Boyne suspects there may be about an inch of water in the snow pack, and even less in some areas all the way across southern Minnesota. However, the problem started last spring, and has little to do with how much snow is on the ground.

From May 1, 2010, through Jan. 31, 2011, the Mower-Freeborn area received 34.4 inches of rain — the sixth most on record, according to the NWS. The same area recorded just 18.5 inches during the last nine months. Boyne added all of southern Minnesota is almost 10 inches below normal precipitation levels for that time period. Much of the Midwest is in moderate drought conditions, as well.

“The precipitation just died off in about June and just continued through the rest of the year,” Boyne said.

What’s worse is that the drought may continue. NWS officials have been watching a very uneventful La Nina system in the Pacific, and Boyne said dry conditions may persist into the spring.

Jon Hillier, agronomist with Northern Country Co-Op, said it has been a long time since he has seen conditions this dry. According to the NWS, the last similar conditions were in the winter of 1989 to 1990, and 1976 to 1977 before that. Hillier and some local farmers aren’t yet worried. Hillier added mid- to late-summer rains are more crucial to crops.

However, some farmers are worried. Robert Nelson, a cattle farmer with corn and bean crops near Alden, said farmers have been concerned since last fall when they harvested their crops. One thing everybody agrees on, however, is the subsoil moisture, which is severely depleted. It has remained that way since last summer.

“This is by far the driest it has been in years,” Nelson said.

Other indicators show drought, as well. River and lake depths are shallow, and tilers have been installing agricultural tile lines in areas that have never been dry enough to install tile, Nelson said.

While snow melt and rain showers will kick start freshly planted crops, a lot more rain will be needed to end the drought. Boyne said the area may need at least an extra inch of rain each month for the next several months. Boyne doesn’t expect that to happen in the spring, either.

“I think we’re at least going to have to continue with the dryness into the early part of the growing season here,” he said.

The scenario may be something few farmers have dealt with often in southern Minnesota.

“We’re not used to this,” Nelson said.

That creates a tricky situation for those forward contracting their crops, too. Farmers will plant their crops in the spring regardless of the situation, but they will be hoping for rain once mid summer hits. Nelson understands the risks of farming, so he also knows that Mother Nature can change the scenario at any time.

But perhaps the best indicator to the end of the drought lies in the old wives’ tales that Nelson and other farmers know. If it rains during the Freeborn County Fair, everything may be OK.