Don’t judge a book by its first listen

This week Eric reviews “In the Court of the Crimson King,” by King Crimson.

If “In the Court of the Crimson King,” the 1969 debut album by King Crimson does anything, it resists any effort to nail it down to one musical path or the other.

The album skips here and there, experimenting with different sounds, feels, emotions and styles to the point that one moment you think you’re listening to experimental jazz raging out of control to what could very well be the theme song to a James Bond movie.

You would think I was exaggerating, and you wouldn’t be far from the truth, but “In the Court of the Crimson King,” does all this while keeping an odd sort of peace with itself that keeps you listening and keeps you intrigued with what comes next, if for no other reason than to try and figure out where to next.

These are musicians doing what they wanted with their creativity, experimenting as they go.

The project amps up quickly with the track “21st Century Schizoid Man,” cools down to an easy feeling sound in the middle tracks and gains a more epic footing with the album’s finale, “The Court of the Crimson King.”

The album has the distinct similarities of progressive groups before and after King Crimson, hinting to what the genre would eventually morph into, but it has its drawbacks as well. Albums like this, that swing wildly with their sound across the map, can either work or it won’t, with very little middle ground for wiggle room. Often times the listener will just give up. 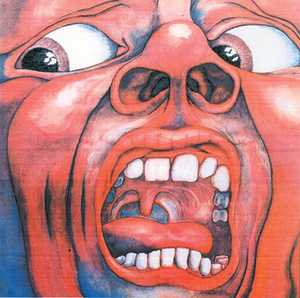 “In the Court of the Crimson King,” by King Crimson

King Crimson’s debut is a 50/50 endeavor in that regard, toeing the line of good and annoying. I’ll admit I was confused by the album on first listen, wondering where exactly it was going, but ultimately the band forces you to keep listening anyway, because one of the charms of King Crimson is to keep you guessing. What comes next?

The album explodes with the initial offering and then slows to a storyteller’s pace, making sure to draw you in before it’s wonderful finale, “The Court of the Crimson King.”

It’s probable you won’t get the album on the first or maybe even second listen, but the musical flow introduced by the combined writing effort of the band is enough to make sure you listen to it a second and third time. It’s compelling in that you’re never sure what’s coming next, except for one little hiccup …

To say I didn’t like the track “Moonchild” is an understatement, akin to saying the Great Wall of China is a pretty big wall.

If King Crimson was attempting to create a 12 minute, 13 second song dedicated to something that sounded like tuning instruments or simply letting a three-year-old bang on various things around a studio, then congratulations are in order. Otherwise, I feel this is just a 12 plus minute tribute to a group just being able to do something because they could. The track is momentous with really no direction as to what it’s doing. You expect the song, at some point, to do something, anything, but it just kind of drones on and then fizzles away.

“21st Century Schizoid Man” will take you by suprise as the song starts fairly slow and literally erupts into a jazzy-based, rock explosion. The song is frantic, but not without flow and would set a pace for the rest of the album. King Crimson is most definitely a progressive act and this song marks the band as a great example of that genre.

King Crimson mashes a guitar jam-session together with horns and wind instruments to serve as the hectic backdrop to singer Greg Lake’s scratchy vocals (After one more album with King Crimson, Lake went on to play with Emerson, Lake and Palmer).

It’s a powerful move that sweeps you up in the jagged peaks and valleys of a song that matches its title perfectly.

Let’s be honest here. I’m not going to run out and purchase this album, nor am I probably going to listen to it again in the near future.

Part of the album’s strength, though, is taking it out and listening to it once and then putting it away for awhile, knowing that someday you’ll listen to it again and pick up something different from the last time.

It’s an impulse listen in a way, but it’s not an all together bad impulse. I would suggest, however, that you will need to be in a mood to listen to it and you may need more than a little bit of patience.

Don’t judge this book by it’s cover of only one listen only.

A group of kids perform as bullies to the main character for Matchbox Children's Theatre's upcoming production of "The Magic... read more