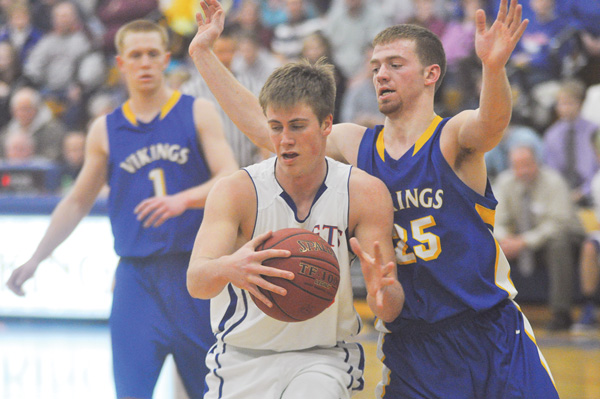 HAYFIELD — The Vikings took a major step towards locking up their first HVL Gold Division title since 2001 when they held on to beat Kasson-Mantorville 38-34 in a boys basketball game in Hayfield Friday.

The Vikings prevailed as the shortest player on the court — Bobbie Stephens — had the most rebounds in the game with 11, and a player who had been shooting 50 percent on free throws in the last three games — Cole Kruger — hit four in a row to clinch it.

Kruger, a sophomore point guard who had 13 points, four assists, three rebounds, and two steals, was shooting 78 percent from the stripe before hitting his recent slump, so Hayfield head coach Chris Pack had plenty of faith in him.

“If there’s a guy to put on the line, I would’ve picked him because he’s our best free throw shooter and he didn’t give them a chance to tie it,” Pack said.

Kruger knocked down four straight free throws in a one-and-one situation in the last 16 seconds of the game to seal the win.

Hayfield (17-4 overall, 9-1 HVL Gold) never trailed in the second half as Tyler Oakland scored on an inside move at the first half buzzer to give his team a 20-18 lead. Hayfield started to pull away in the second half when Kruger got free for a three-point play on a breakaway to make it 29-22 with 10:33 left in the game. 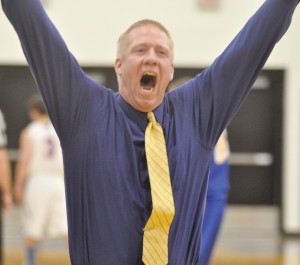 “We kind of pushed it when we could on long rebounds, otherwise, we just kept it slow,” Kruger said. “We played fantastic defense.”

With Hayfield leading 34-32, the Komets came up with a steal with 2:29 left in the game, but they missed two point blank game-tying shots and two three-pointers that would’ve given them the lead on one possession.

The Vikings, who have now won seven in a row, held possession and forced KM to foul from that point on.

Hayfield’s biggest battle against the Komets was down low as Hayfield center Brady Stevens, who is 6-3, put up 11 points and three rebounds as he helped hold KM’s 6-8 center Griffin Reed to 10 points and nine rebounds.

“I was just making him go to his left, because he doesn’t like to use his left hand. We forced him into some tough shots and kept him off the glass,” Stevens said.

Stevens, who played the last four minutes with four fouls, had some big shots inside in the first half and he hit a key 15-foot jump shot to make it 34-30 with 3:20 left.

“I had some confidence and I knocked them down at the right time,” Stevens said. “With four fouls you’ve got to play smart and you can’t do anything dumb like give up any wide open lay-ups.”

Hayfield lost to KM 55-45 Jan. 10 and the Komets had won 11 straight games heading into Friday’s contest.

“The first time we played them we had seven turnovers right away and I said we couldn’t turn it over tonight, and we had way too many unforced turnovers,” Pack said. “But the difference this time was our defense. We really locked down on them and we executed our game plan with the things we worked on the last few days of practice.”

With the win, the Vikings are now in the driver’s seat in the HVL Gold Division. They have a big game at Byron (17-3 overall, 8-2 HVL Gold) Tuesday and they have three more HVL games remaining after that.

“This win is huge, but we’ve still got to take care of business in Byron, but this sets up for hopefully at least a share,” Kruger said.

Lyle/Pacelli's Maggie Lewison dribbles around a screen by teammate Madison Truckenmiller during the first half against Hope Lutheran Friday night... read more