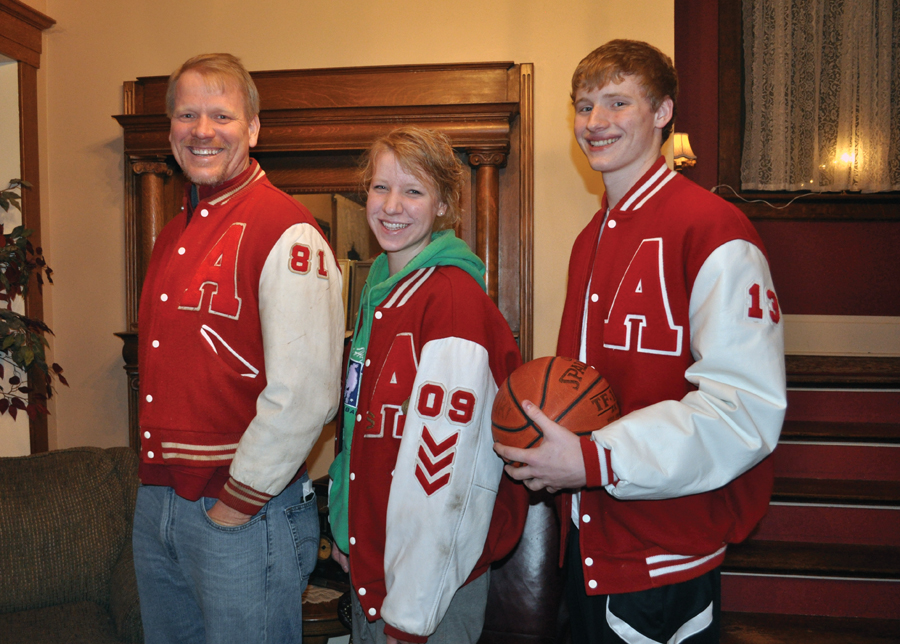 Austin center Joe Aase knows all about his dad Lee’s history on the basketball court.

He knows he went to the state basketball tournament in 1981 with the Packers and he knows he played in the title game.

Joe also knows about his sister Rebekah. He knows she played in the state basketball tournament in 2008 because he was there.

Now Joe’s hoping he finally gets his chance to play in the state tournament as the Packers (12-4 overall, 9-2 Big Nine) are currently sitting atop the Section 1A standings and are just a half game behind Owatonna in the Big Nine.

“We want to go (to state) really bad. I think we’ve got a good shot this year and I don’t even want to think about next year yet,” Joe said. “We didn’t start off the year playing really well together, but since January we’ve been playing real well together. We’re definitely moving the ball better and I’m pretty confident and I’m looking forward to the tournament. I was nervous last year.”

Last year Austin’s season came to a crushing end in a close loss at Winona. The Packers led that game by eight in the second half of that game, but with two sophomores and a freshman in the starting lineup, they just couldn’t keep it going.

While that loss stung, it motivated Joe to put in 50 games of AAU basketball along with teammates Tom Aase and Zach Wessels over the summer. It also put a drive in the Packers to lock up homecourt advantage this season.

Lee, who said this year’s team reminds him of his 1981 team, sees the Packers as a very tough home team this season.

The Packers went 24-1 back in 1981 when there were no three-point shots and Minnesota was divided into just two classes. Austin went unbeaten until they lost to Anoka in the championship game.

“There’s a lot in common between our team, Bekah’s team and the team you see this year,” Lee said. “We had four guys averaging double figures and if you doubled anybody, they would make you pay. There was balance and it’s a team concept. It was neat getting to see Bekah jump at Target Center (in 2008) and it would be fun to see if Joe gets to do that at Williams Arena this year. It’s an exciting thing as a dad.”

Rebekah looks back fondly on her trip to the state tournament, which was clinched when Brittney Gibson hit a buzzer-beating three in a win over New Prauge in the section finals.

“When we won our section final game it was the best feeling in the world, so I hope Joe gets to do that too,” Rebekah said. “It was pretty cool to jump in the state tournament like my dad did.”

Joe, who was a seventh grader in 2008, said his big sister’s trip to state helped him gain appreciation for what it meant to go to the state tournament. He had never even been to Target Center before he watched the Packer girls play there.

“I didn’t know what it meant to go to state,” Joe said. “I knew it was a big deal, but I didn’t know how big of a deal it was until I got to Target Center and saw how big it was and it was packed.”

After taking the last three years off from basketball to focus on school, Rebekah joined the Riverland team this year, where she is leading the squad in points per game (14.2) and rebounds per game (9.7).

Since she’s going through the rigors of nursing school, Rebekah wasn’t sure she could take on basketball, but thanks to the advice of Joe, she tried it.

“I hadn’t really thought about playing and it was a tough decision because I’m in the nursing program,” she said. “But it’s been really good and it’s a nice break from school. That makes it a lot of fun to play.”

Joe, who is averaging 14.8 points per game this season, has found his scoring stroke for the Packers as of late as he’s posted at least 17 points in seven of the last nine games. Austin head coach Kris Fadness said he’s seen Joe hit his stride.

“Joe was struggling a little in the first few games, but now he’s really taking off,” Fadness said. “It doesn’t hurt Joe to follow Lee. He was a very good player. But they’re a little different because Lee liked to go inside and Joe likes to shoot from the outside. It’s a neat dynamic for the two of them.”

Rebekah playing with Riverland and Joe playing for the Packers has made for a busy winter for Lee, but he wouldn’t have it any other way.

“It’s neat to go to the boys games and every game there’s a good chance they’re going to win,” Lee said. “Between that and Riverland, we’ll probably see 35 basketball games this year.“

Besides attending games, Lee, and the other Austin basketball parents, have made other efforts to help the squad as much of the Packers played on Austin’s summer teams and some of them played on AAU teams.

“Our group of parents have been extremely supportive,” Fadness said. “They want to see their kids have the same success that they had and they would love to see them go to state.”

In fact, it’s not even an issue for Joe, especially now that his dad won’t play him one-on-one anymore.

“We used to play one-on-one, but he doesn’t like it when I beat him,” Joe said. “I’ve heard his state tournament story probably a thousand times, but I never felt any pressure. I love basketball and I don’t play basketball because he played basketball. I play because I love it.”

Joe will likely follow his dad and sister in one more feat — playing college basketball. Lee played at Waldorf for one season, where he met his wife and Joe has already received some calls and even an offer from Division II Minnesota State University.

But he’s going to wait until early next year before deciding where he’s going.

The last Austin team to go to state was the 1982 team, which lost in the first round to Chaska.

The Packers will host Rochester Mayo in Packer Gym Friday at 7:30 p.m.