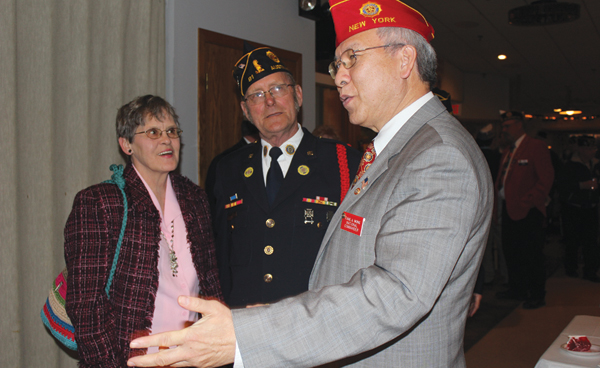 American Legions across the nation are getting visits from an important individual, and that man made time for dinner and discussion Monday night at Post 91 in Austin.

“It’s very prestigious for me to have the national commander here,” Hanson said.

While Wong has never been to Austin and didn’t know the members, he was still very much at home.

Despite the lack of familiarity with each person, Wong said, the trips are wonderful.

“Because we all speak the same language, we all have the same concerns,” he said.

Wong, a naturalized U.S. citizen who was born in China, knows all about those concerns. He voluntarily joined the U.S. Army and served 25 months in Vietnam. He remained in the Army for 20 years. After retiring, he joined the Lt. B.R. Kimlau Chinese Memorial American Legion Post 1291 in New York. He has seen the struggles that many veterans deal with. Right now, Wong said, the most important issue facing veterans is employment.

For many veterans, that is still a tough thing to find. Wong wants to get the attention of both legislators and private-sector businesses, so veterans can have a fair chance at employment.

He said many veterans have the skills to work numerous jobs; however, their skills don’t always look relevant on resumes.

“Their training will not always translate into a well-qualified resume,” he said.

Yet the American Legion is always looking for strength in numbers. Wong said young members are joining, and membership numbers across the nation are about the same as they were last year. A steady crop of new Legionnaires is important because they best know how to serve one another. Current American Legion members sometimes know what younger members may be dealing with.

“We are in a good position of communicating (those issues),” he said.

Wong will talk more about those issues at nine more upcoming post visits in Minnesota, starting at 8 a.m. Tuesday in Blue Earth.

It will be a big day for a small school. Austin Public Schools will break ground on the Woodson Kindergarten... read more