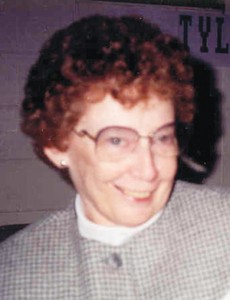 Alberta Lorraine Wolfe, of Austin, passed away peacefully on Thursday, Feb. 2, surrounded by her family at Our House Senior Living – Memory Care Center.

Alberta was born on Feb. 9, 1931, in Stewartville, to Lila Oldenburg. She grew up in Austin and graduated from Austin High School. On Aug. 19, 1950, she married Donald Wolfe in Austin.

Alberta (known as Birdie) to many, was a homemaker the majority of her life but also held various positions in the Austin community. She worked at Hormel in her earlier years. She later adopted two daughters and spent the majority of her time with her family. Alberta worked part time at Ankeny’s, Johnson’s Green House, and Main Street Gifts to name a few. She loved her jobs and working with public.

Alberta was a member of the Austin Church of Christ since childhood. She loved her family, gardening, traveling and camping. She also raised poodles for a few years while the kids were young which was a great memory to the family. Alberta was very active in her church with ladies circles, various bible study groups, and social activities. Alberta’s gift was being a giver. She loved baking and sharing her goodies and homemade soups with others … especially with those that were ill.

Funeral services will be held 11 a.m. on Tuesday, Feb. 7, 2012, at the Church of Christ with Rev. Dave DeFor officiating. Friends may call from 4 to 7 p.m. on Monday at Mayer Funeral Home and also one hour before the service at the church on Tuesday. Interment will be in Oakwood Cemetery.

Alberta is now at peace and spending eternity with her Lord and Savior.

Naomi Friedrich Naomi (VanRiper Meier) Friedrich, 102, passed away peacefully at her home at the Cedars of Austin on Feb.... read more