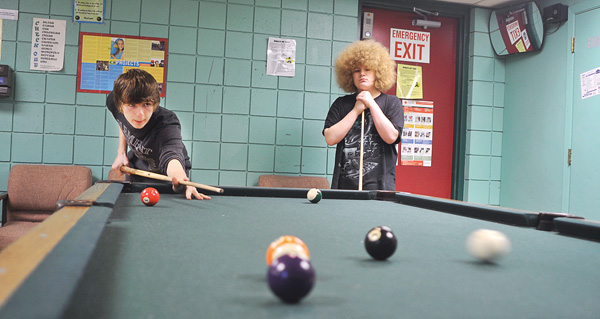 Rachel Vasquez goes to the Youth Activity Center almost daily. She loves to hang out, talk with friends, use a computer — stuff any teenager would do. The 15-year-old has plenty of company, with about 40 students a day on average at the YAC, tucked inside Riverside Arena. The best days to be at the YAC, according to Vasquez, are Wednesdays and Fridays.

Conner Johnson agrees that Wednesdays and Fridays are best. He remembers coming to the YAC when he was little since his dad worked there, a long time ago. At 13 years old, Johnson can come whenever he wants, since the YAC is open to fifth- through 12th-graders.

Yet Johnson, Vasquez, and other students say the YAC is a little small. Cramped even, according to some.

“It gets claustrophobic,” said Javier Samoras, 13. 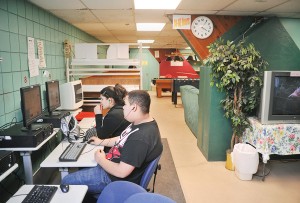 Many Austin residents say there should be a large youth center in the area. The topic has come up over the years, but with a youth center on the Vision 2020 Top 30 list and organizations from the city of Austin to the Community Against Bullying looking into the subject, a youth recreation center in the area could become a reality.

Though there have been many attempts to put a youth center in the area, Austin residents buzzed about a potential youth center last September, during Vision 2020’s idea submission period. Vision2020 organizers received almost three pages’ worth of ideas out of 79 total pages.

“That’s why you do a project like this, to give people a chance to really say what’s on their minds,” said Laura Helle, Executive Director of the Hormel Historic Home and Vision2020 organizer. Helle said she didn’t realize a youth center was such a big deal to residents until she saw the ideas pouring in.

“In late October, it started showing up as a very prominent piece,” Helle said.

Since then, support for the idea is growing, with groups like Community Against Bullying making a youth center a priority.

“It’s definitely a need we see,” said Danielle Borgerson-Nesvold, CAB organizer. “We know this is a resource that kids in town need.”

A clear example of what Austin could build lies in Albert Lea, at The Rock. The Rock is a Christian-based youth center under Youth For Christ that has helped children of all ages since 1991. Greg Gudal and his wife Robin have run the 10,000 square-feet center since it opened. According to Greg, the programs and areas they ran before The Rock were too popular for the small spaces the Gudals worked in.

“We had too many kids coming, so we had to move to a bigger organization,” he said.

Like the YAC, The Rock has video games, pool tables, foosball, air hockey and other amenities for kids. Yet The Rock puts on programs ranging from bible studies for elementary, middle and high school students to informal support groups and camping trips to Colorado, Canada and more. They even have homework help several times a week, when staff turn off games and activities to provide academic help for students from 5 to 6 or 6:30 p.m.

“It’s not the youth center itself, but it’s the programs that help the kids,” Greg said. “That’s the difference maker.”

According to Greg, The Rock serves about 600 students a month, with anywhere from 40 to 100 students a day coming to the center, depending on the season. Oftentimes, students are able to work at the center, whether it be for credit towards field trips and snacks or for community service hours. Greg said as trusted students get older, they get more responsibilities to help other students by cleaning or supervising certain parts of the center. The center’s mission is to help students know Christ, though the group welcomes students of all faiths.

Even The Rock has space issues, however. Staff are looking into ways to increase programming such as art classes, and Gudal said another 2,000 to 3,000 square feet would really help.

Youth For Christ has previously looked into opening a youth center in Austin, especially in recent years where volunteers have looked at buildings in town, but those plans haven’t materialized yet, according to Greg.

“I guess it just hasn’t been the right time and we haven’t been able to gather enough people together to see it happen,” he said.

One of the most prevalent reasons why people want a center is to help students stay out of trouble. In that aspect, a youth center might not be the solution.

“If you’re relating the youth center with decreasing crime … The most important factor is parenting and the willingness to set boundaries and rules,” said Steve King, director of Mower County Department of Corrections.

King is all for more youth opportunities, but said addressing family norms and home life helps decrease crime more than keeping kids busy and engaged. The county corrections department spent $1 million in 2011 on out-of-home placements. Law enforcement, probation officers and county courts placed 85 children in other environments in 2011, about 199 placements total. That’s half of the department’s $2 million total budget. About nine to 10 children are placed in state facilities, which eats up a large part of the Department of Corrections’s juvenile services budget. In addition, Mower County Law Enforcement made 423 juvenile arrests in 2010, with 369 arrests made by Austin Police, according to the Bureau of Criminal Apprehension.

Though King said creating more youth activities is important, Austin youth have outlets like the YMCA and the YAC.

“In Austin, Minn., if you’re a kid, you’ve got plenty of things to be doing,” King said.

Still, city officials are looking into the matter. City officials have spoken with Riverland Community College officials about creating a shared recreation center with expanded athletic courts which youth and Riverland students could use. One of the biggest YAC requests from youth and adults is getting a basketball court for students.

“It’s a good safe area for them to go,” said Valerie Pitzen, Park and Recreation supervisor.

Pitzen said city officials have discussed an expanded center for about five years, even touring the recreation center in Osage, Iowa last summer. A new center could host state basketball and tennis tournaments, among other indoor sports, which would draw money into the community.

The problem is, with the economy struggling to right itself and decreasing local funding, a new youth center has been low on city priorities. The YAC recently got computers from the Austin Public Library, which upgraded their computer system. Those computers replace even older equipment, which YAC staff are giving away free to students who want them.

Regardless, if there’s enough buzz, a new youth center may finally make its way into town.

“I have absolutely no doubt that there will be projects whether they make it into the Top 10 (Vision2020 ideas) that … (people) will get into action,” Helle said.

Police: Dad of missing Maine tot not telling all