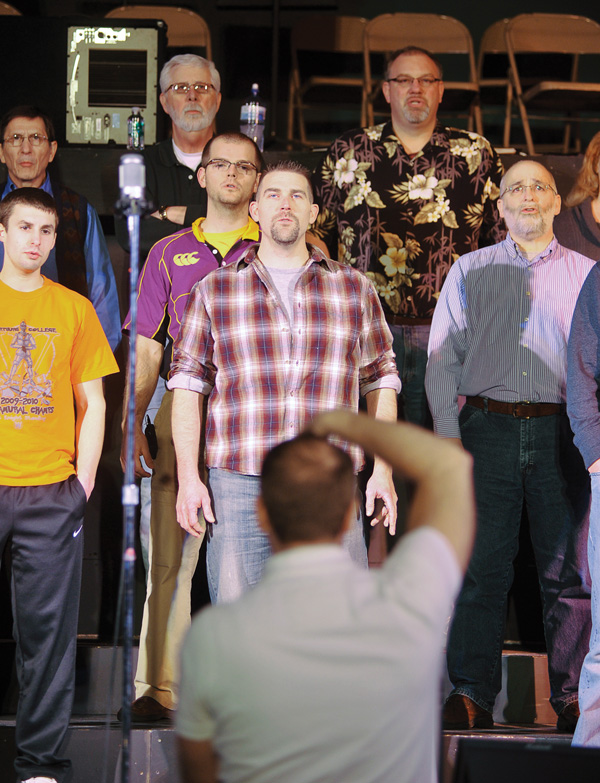 The Northwestern Singers rehearse for their upcoming winter show, "Timeless," which will be performed Jan. 21-22 at the Paramount Theatre. - Eric Johnson/photodesk@austindailyherald.com

This Saturday and Sunday, the Northwestern Singers will take audiences through time when they present “Timeless” at the Paramount Theatre.

This annual winter show — put on by notable Austin singers and performers — will conjure thoughts of nostalgia with classics like “Bridge Over Troubled Water,” “Somewhere Over the Rainbow,” “Dream a Little Dream,” and songs by Cole Porter.

“I think they are going to recognize a lot of these songs,” said long-time Northwestern Singers member Rick Young.

Nikky Krautbauer, Northwestern Singers board member, singer and Neveln Elementary music teacher, pointed to the inherent joy of these types of songs.

“This is just filled with a lot of timeless songs — songs (the crowd) will recognize,” Krautbauer said. “When you sing songs you’re familiar with you see the enjoyment.”

The concert is specifically geared toward that: the enjoyment of remembering.

“It’s just those songs that bring people back to certain places,” she said.

Brock Besse, artistic director for the Northwestern Singers, said these songs will hopefully bring more people to the show.

“We’re trying to get as many people to our concerts as we can, so we play some of the music they remember,” Besse said.

In particular, Besse points to the opening and closing numbers, all of which feature the word “time.”

“We have some new arrangements of old favorites,” he said.

And just in case you needed more, the show again is featuring singers from Neveln Elementary with some from Pacelli Elementary School who will sing numbers on their own and with the main body of Northwestern Singers.

On their own, the young singers will perform songs from Willy Wonka and Peter Pan.

The winter show is the first of three major shows the Northwestern Singers perform, which includes the group’s annual spring concert and its benefit show that over the last 11 years has raised more than $33,000.

This weekend’s pair of performances will take place at 7 p.m. Saturday night with a 3 p.m. matinee on Sunday.

Tickets are $12 for adults and $5 for students and are available at the Paramount Theatre, Hy-Vee in Austin, Marshall Street Music in Albert Lea and from the Northwestern Singers themselves and at the door.

A 36-year-old Austin man has been charged with raping and attempting to strangle his ex-girlfriend in Albert Lea in what... read more