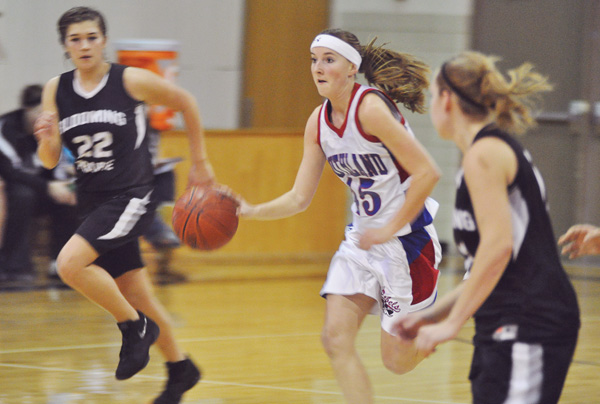 Southland's Elizabeth May dribbles the ball up on a fast break as the Rebels beat Blooming Prairie 77-35 in BP Thursday. -- Rocky Hulne/sports@austindailyherald.com

BLOOMING PRAIRIE — After giving the Awesome Blossoms a little hope in the first half, the Rebels erased all doubts with a strong second in a 77-35 win in a girls basketball game in BP Thursday.

BP pulled to within 30-24 when Taylor Hagen hit a jump shot with 6:12 left in the first half, but Southland (10-1 overall) cranked up the pressure from that point as it closed the first half on a 14-3 run and opened the second half on another 14-3 run.

“When we came out in the second half, it was a way different game. We were more into it,” said Southland center Haley Kirkpatrick, who had 13 points and 10 rebounds. 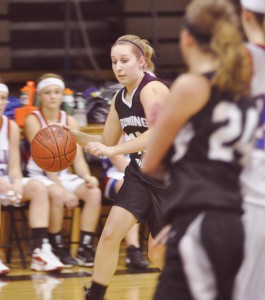 “We’re working a lot better as a team than we did at the beginning of the year,” Kirkpatrick said. “It took a little bit to get used to the (big rotation) but now everyone’s more connected and it works really well for our team.”

The Rebels, who like to get out and run, showed some good things in their half court offense. They committed just nine turnovers and were able to work the ball for some inside looks.

“We tend to rush in our half court offense and tonight we were a lot more poised then we have been in the past,” Southland head coach Bob Sheehan said. “It’s really good to see that they’re maturing into an all-around basketball team.”

BP put up 27 points in the first half, but the Rebels held them to eight second half points. One big difference was that Southland keyed on freshman center Taylor Hagen, who scored nine of her 11 points and eight of her nine rebounds in the first half.

“We tried to shut down Hagen in the second half,” said Southland forward Madi Schmitz, who had 13 points, five rebounds, five steals and three assists. “Coming in we kind of knew how she played because she played AAU ball with some of us this summer. We knew she would be tough, but she was a little tougher than we expected.”

For BP, it’s yet another game were they played solid for spurts, but couldn’t keep it going.

“Hopefully we learn that you just can’t relax and there’s two halves to every game,” BP head coach John Worke said. “We’ve always shown we can play in glimpses, but we say thirty-six minutes before we start every game and we haven’t been able to do that. As the season goes on that’s something that the kids are going to have to learn.”

Vikings fall to No. 8 Komets

The Hayfield girls basketball team fell to Kasson-Mantorville 60-51 in Hayfield Thursday. The Komets (15-0 overall), who are ranked No.... read more