The funeral service for Raymond Harvey Johnson will be 2 p.m. Wednesday, Jan. 18, 2012, at the First Presbyterian Church, 109 Main Street East in Hayfield, Minn., with Rev. Charlie Talcott officiating. Interment will be in Fairview Cemetery with military honors by the Hayfield American Legion Post 330. 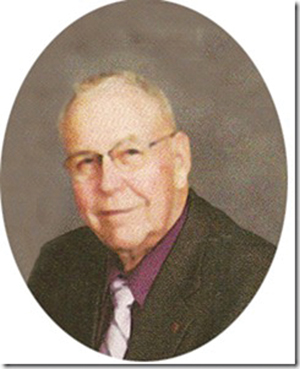 Raymond Harvey Johnson was born on Feb. 13, 1929, the son of Paul and Hazel (Eklund) Johnson in Hayfield. Raymond was confirmed in the Lutheran Faith. He attended District 72 Country School and attended Hayfield Public Schools, starting at the seventh grade and graduated in 1947. Raymond served in the Army from 1955-1956, in France. Raymond was united in marriage to Shirley Janes on Dec. 18, 1954, in Hayfield. Raymond was a farmer in his earlier years and later took a job as a rural mail carrier and retired in 1990. He was a member of the First Presbyterian Church, a former board member of the Hayfield Lions, and a member of the Hayfield American Legion. He enjoyed his grandchildren, fishing, hunting, playing cards and spending summers up on Leech Lake.

Visitation will be from 5 to 8 p.m. Tuesday, Jan. 17, 2012, at the Czaplewski Family Funeral Home, 501 Second St. NW in Hayfield, and one hour before the service at the church on Wednesday.