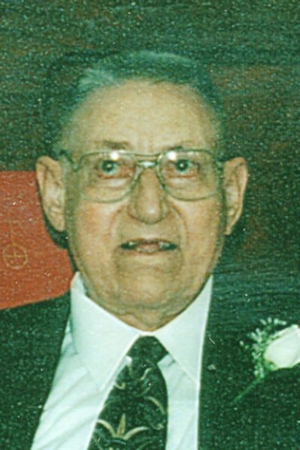 Ralph was born on July 1, 1912, at his parents’ home in Ashland Township. He graduated from Dodge Center High School on July 1, 1924. He worked with his father and two brothers on the family farm until 1941, when he entered the Army. He served during World War II in the Aleutian Islands in Alaska. After being discharged from the Army in 1945, he married Phyllis Wyttenbach on Sept. 1, 1946. They moved to another farm, about one mile from his parents’ farm. He farmed in partnership with his father and two brothers until they retired from farming in 1978. Ralph loved fishing, hunting and bowling. He served as a Dodge County Commissioner for 12 years, which he enjoyed very much. He was a leader of the Super Jets 4-H Club for many years. He was a member of First Baptist Church in Kasson, Minn.

He is survived by his four children, Royce and Karen Helmbrecht of Austin, Stephen and Donalyn Elliott of Dallas, Texas, Dale and Susan Queensland of Grand Meadow, Minn., and Bruce and Shirley Helmbrecht of Stilwell, Kan.; 12 grandchildren; 18 great-grandchildren.

The celebration of Ralph’s life will be held with a visitation at 9:30 a.m. Saturday, Feb. 11, 2012, at the First Baptist Church in Kasson, Minn., followed by the funeral service at 10:30. Burial will be in Maplewood Cemetery in Kasson. We thank the Lord for Ralph’s rich life on Earth, and we know he is enjoying his entry into heaven.