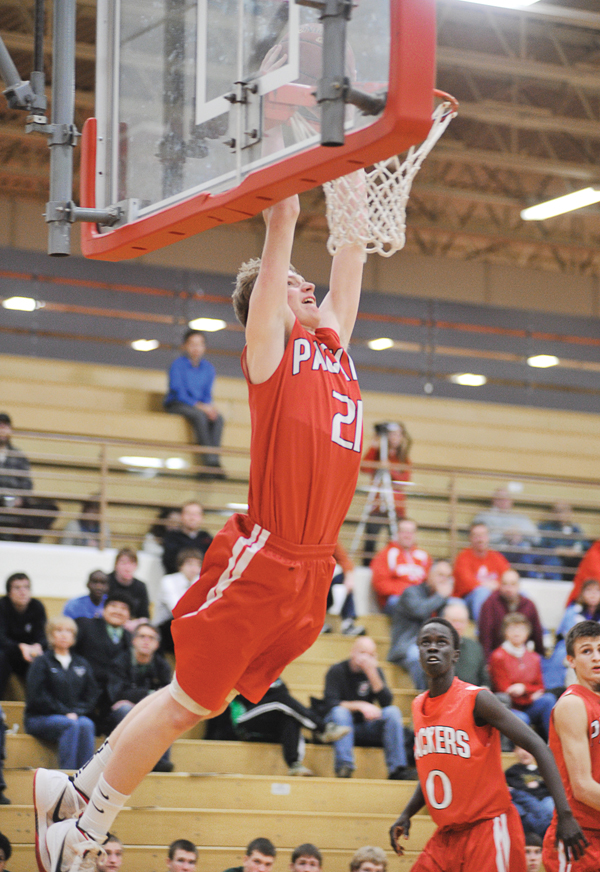 The Austin boys basketball team didn’t waste any time in establishing it’s style in a 74-19 win over Faribault in Packer Gym Tuesday.

“You knew it was an uphill climb for them,” Austin head coach Kris Fadness said. “I thought they had a great first possession of the game running clock and then they missed a lay-up. I hate to say it, but once it was 5-0 it was over because they couldn’t play the way they wanted to and we started scoring and getting into our press.” 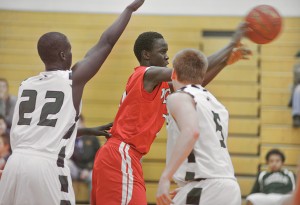 Austn's Goliath Oboyo kicks the ball out against Faribault during the first half Tuesday night in Packer Gym. - Eric Johnson/photodesk@austindailyherald.com

Austin junior Collin Weisert gave his team a boost as he scored all 14 of his career-high points in the first half. Weisert went 4-for-4 from the field and 3-for-3 on three-pointers.

“We’ve played sloppy (in games like this) a few times before,” Weisert said. “We just wanted to come out strong and focused. We wanted to play crisp and make good passes.”

Austin’s Joe Aase, who scored 20 points in Friday’s win over Mankato West, had another solid outing as he tallied 17 points on 6-of-7 shooting and grabbed four rebounds.

“Joe had a really good game agaisnt West and maybe he’s finally settling down and doing what he can do,” Fadness said. “That’s nice to see.”

Austin was able to clear it’s bench for most of the second half as the score got out of hand. In the end, 11 players scored for the Packers.

“So many times that turns into slop ball because guys are worried about getting their own, but we had some good possessions and I was happy with how they played,” Fadness said. “I was happy with the whole team tonight and we played well.”