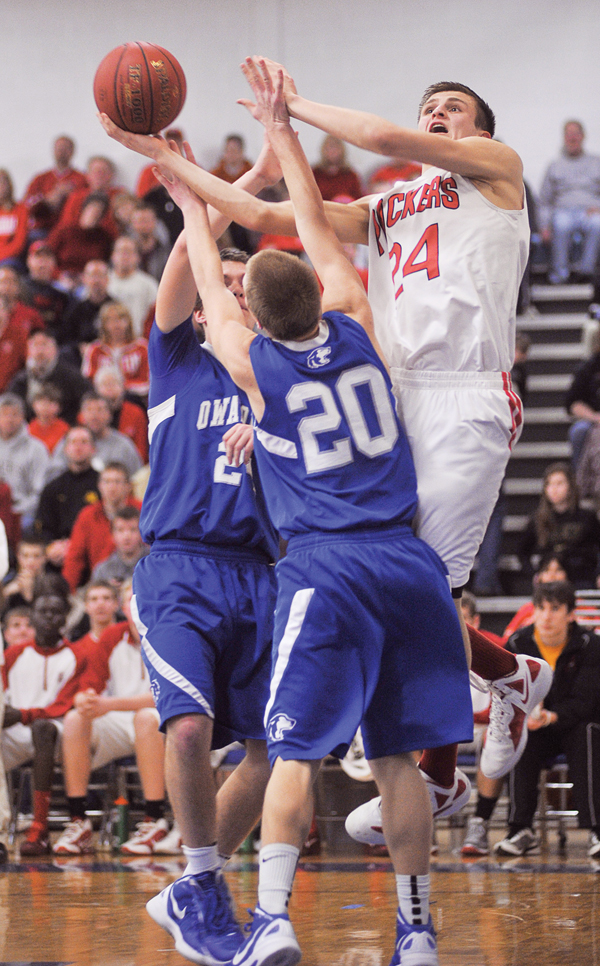 Austin's Tom Aase puts a shot up over Owatonna's Ryan Emanuelson (20) and Logan Busho during the second half Friday night in Owatonna. - Eric Johnson/photodesk@austindailyherald.com

OWATONNA — The word of the night was physical.

The Packers showed they could match up with the strength of Owatonna for most of the night in a showdown between the top two teams in the Big Nine, but a few missed opportunities down the stretch cost Austin in a 39-34 loss at Owatonna Friday.

The Packers (11-4 overall, 8-2 Big Nine) took a 26-19 lead when Zach Vierkandt, who scored all seven of his points in the second half, hit a three with 9:46 left in the game. But the No. 8 ranked Packers mustered just eight points the rest of the way as they dropped to second place in the Big Nine behind the Huskies (14-3 overall, 8-1 Big Nine). 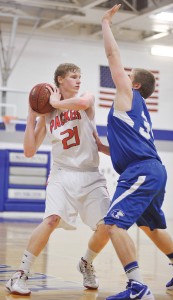 “Height was not a factor, because when you’re allowed to hold and tuck, it’s all about who’s stronger,” Austin head coach Kris Fadness said. “Rebounding was a war and I didn’t feel like we could run any of our (offensive) sets. Because we were getting held all game every time we made a cut.”

Austin junior center Joe Aase, who finished with 11 points, six rebounds and two blocks, finished off a tough shot inside that resulted in a three-point play to make it 32-31 Owatonna with 4:15 left in the game, but Owatonna’s Matt Simon came up with a steal on Austin’s next possession that led to a baseline three by Nick Isaackson to make it 35-31 with 3:30 left.

Aase came up with a put-back to make it 35-33 with three minutes left, but he couldn’t hit a go-head three with 50 seconds left as he missed a trey from the wing.

“That last one was brutal, I thought it was going in the whole time,” Aase said. “We knew we could play with them going in and we feel like it’s a missed opportunity. We could’ve been in real good shape in the conference with a ‘W’ tonight, but we’ve still got them again at home.”

Austin sophomore Zach Wessels helped boost the Packers to a 20-12 lead with 1:49 left in the first half as he scored all eight of his points in the first 18 minutes. Owatonna’s guards got physical with Wessels to slow him down in the second half.

“It was a very physical game and we got kind of tired in the second half. We’ve just got to rest and come out fresh against Albert Lea (next week),” Wessels said.

The Packers showed their poise for much of the night in the face of a hostile crowd. Austin had just 11 turnovers, while forcing eight Owatonna turnovers.

“When sections come around, it’ll be like this and it’s better to get used to it now,” Wessels said. “It definitely felt like a playoff game with the crowd noise and everything.”

The Huskies and Packers will meet again in the last game of the regular season, which is in Austin March 2.

“I think (this was) a great learning experience for us and I feel good about the second half of the season for us,” Fadness said. “We’re one game back and we’re going to see them again.” 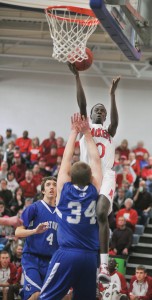 Austin's Goliath Oboyo tries to go over Owatonna's Matt Simon during the second half Friday night in Owatonna. - Eric Johnson/photodesk@austindailyherald.com

Packer boys survive half court buzzer beater to top No. 5 Cougars in OT

The Packers swept the season series against No. 5 ranked Mankato East (12-3 overall, 6-3 Big Nine) as they prevailed... read more