Off the beaten trail 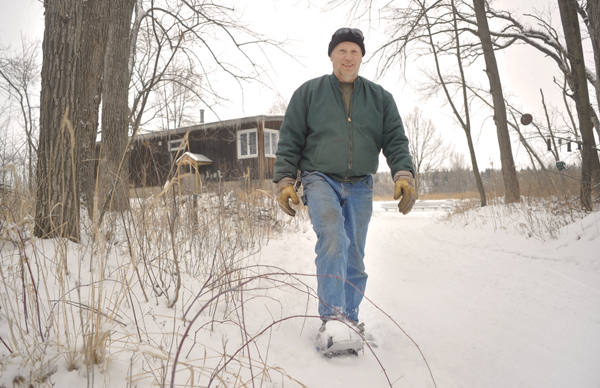 Nature Center offering snowshoe rentals thanks to grant from S.H.I.P.

Get ready for some contemplative exercise this winter.

If you’re looking to enjoy nature, get off the beaten path and spend some time to watch the woods, the Jay C. Hormel Nature Center has your newest hobby: snowshoeing.

“Snowshoeing may be a little more about exploring and observing,” said Larry Dolphin, director of the nature center. “You don’t have to stay on our trails to get around with snowshoes.” 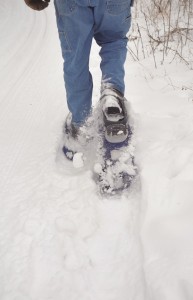 Snowshoes can take you a lot of places off the path during the winter. - Eric Johnson/photodesk@austindailyherald.com

This is the first full year the nature center will offer snowshoe rentals after receiving a State Health Improvement Program grant for $4,600 in late 2010. The nature center bought 25 pairs of new snowshoes and put up more signs along nature center paths with the grant money. Yet by the time all the snowshoes got in, last year’s snow-heavy winter was almost done.

“We didn’t get the snowshoes until the end of the season,” said Julie Champlin, nature center assistant. “I rented maybe one person snowshoes in February.”

To make matters even more complicated, this year’s snow drought meant no one could use the snowshoes until a big snowfall happened. While cross country skis can be used in light snow, snowshoes need to have at least 7 or 8 inches of snow so they won’t break when people use them, according to Dolphin. This month’s snow solved that problem, as last week marked the nature center’s opening of ski trails and snowshoeing opportunities.

“It has finally come to pass where we’ve got some snow,” Dolpin said.

“We didn’t have a volume enough to offer them to the public.” Champlin said.

Why try snowshoeing? For one thing, snowshoes are a little different from cross country skiing. They have a few different clasps, but once residents are strapped in, it’s time to float on the snow.

What’s more, snowshoeing is a little easier on the legs, which is perfect for older outdoor enthusiasts. Snowshoers can walk on top of the snow, which means they can tromp around areas in the nature center normally off-limits to the public. Though snowshoers can’t go on the ski trails (as their tracks wouldn’t help the trails stay smooth), snowshoers can tromp through the prairie and wood where people would normally find it impossible to go through. 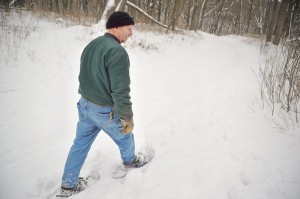 Snowshoes allow not only for easier walking on paths, but enables the walker to go off path as well. - Eric Johnson/photodesk@austindailyherald.com

“We allow that here, and that’s something we normally don’t do,” Champlin said.

Though Champlin loves to cross country ski, she’s grown to appreciate the calm of snowshoeing over the years. For Champlin, it’s a nice way to exercise while observing the nature center’s serene winter beauty. While there are many who snowshoe by themselves, people can partner up for snowshoeing excursions.

The nature center’s winter season is now open, with free skiing and snowshoeing on Thursdays from 3 to 6 p.m. for all ages. There is a cross country ski lesson scheduled 8:30-11:30 a.m. Saturday, Jan. 28. The ski lesson fee is the cost of a rental, or $1 for children and $6 for adults. Snowshoe rentals are $1 for children and $5 for adults. The low rental fees are made possibly by a donation from Dr. Dick and Belita Schindler. For more information contact the nature center at 437-7519 or www.hormelnaturecenter.org.