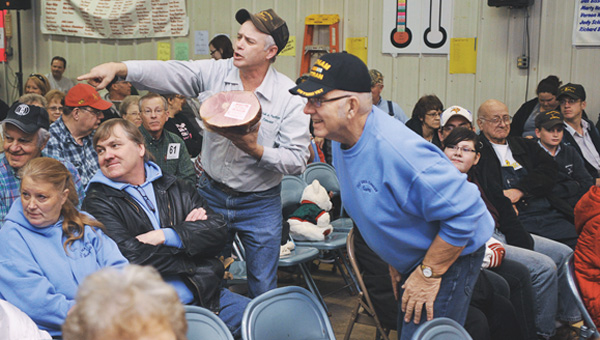 Carl Shirk, left, with Gary Harrison looks to a bidder for the nod whlie auctioning a ham during the Lyle Area Cancer Auction Saturday in Lyle. -- Eric Johnson/photodesk@austindailyherald.com

The Lyle Area Cancer Auction shattered another record this year. 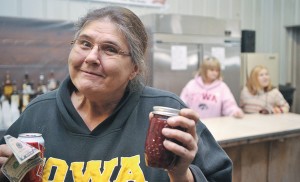 Carol Kleckner of Osage, Iowa holds up a jar of blueberry, rhubarb and raspberry jam she bought at the Lyle Area Cancer Auction Saturday afternoon for $30. Kleckner thought she was paying $3 for the jar, but in the end, it made little difference. "We came up to support them," she said. "It's a great cause."

Ricke and other LAC committee volunteers pledged the money to Eagles Cancer Telethon at 3:30 p.m. Sunday in Rochester. The money will go toward cancer research at institutions like The Hormel Institute, the Mayo Clinic and the University of Minnesota.

Along with the highest total earnings, the auction also saw the most expensive item ever sold at the auction. A gift certificate for braces at Overby Orthodontics sold for $4,085 to Joel and Carrie Nelson of Lyle.

By Friday night, the auction had already raised $13,000, and volunteers were confident they’d surpass $150,000, according to Ricke.

The auction isn’t the only fundraiser for LAC. About 24 events make up LAC — 15 are held throughout the year and the rest occur the weekend of the auction.

“Every event that we had was up,” Ricke said.

Ricke said more than 95 percent of the more than 900 items sold at face value or higher.

Ricke stressed thanks to everyone who contributed and gave back to the auction.

“Without the excitement, without them people we just wouldn’t do it,” he said.

Concept album shows what home recording can do