LP guards combine for 46 in win 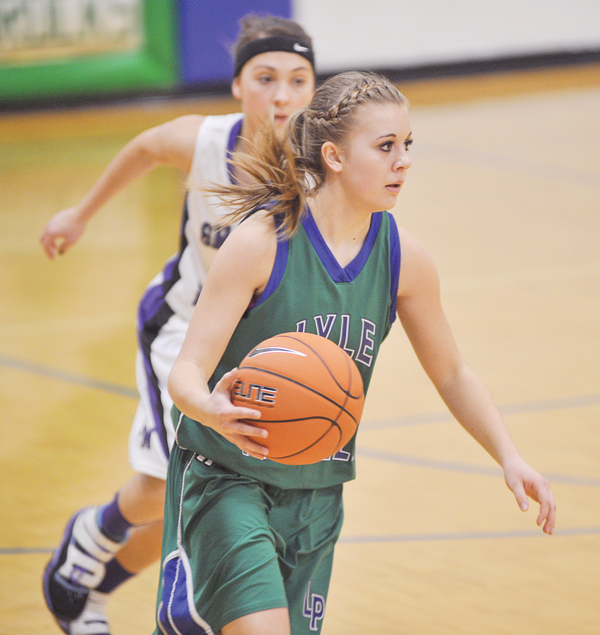 LYLE — The Lyle-Pacelli starting backcourt combined for 46 points, while Grand Meadow had three guards foul out as the Athletics won 64-51 in a girls basketball game in Lyle Tuesday. 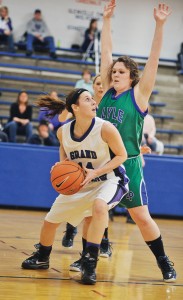 Grand Meadow's Stephanie Russell works inside against Lyle-Pacelli's Maggie Leif during the first half Tuesday night in Lyle.- Eric Johnson/photodesk@austindailyherald.com

Rysavy started to attack the hoop relentlessly after GM guard Autumn Thorsen fouled out early in the second half.

“I think it really made us really confident that we could finish it off with (Thorsen) out,” Rysavy said. “We should’ve felt that way before she fouled out, but she’s a great player and she’s tough.”

The win gives LP a sweep over the Superlarks this season.

“I think we’re pretty evenly matched teams,” LP head coach Brad Walter said. “We’re very similar, but foul trouble was the difference in the game. When Thorsen was out, it’s no different than us losing Courtney or Ann and it’s sad to see for them.”

Thorsen scored seven points before fouling out and Ashley Crumb, who had three assists, and Rachel Oehlke also fouled out for GM.

“Our guards were trying to get the steal and that’s been a problem all year,” GM head coach Dawn Baudoin said. “You can’t keep reaching in and we put ourselves in that position. It was a game we needed to have to get some momentum tonight. The mistakes we made, we can’t be making at this time of the year.”

Russell kept GM in the game as she scored 16 of her 20 points in the second half.

“Stephanie took over for us. She just took us on her shoulders and I give her a lot of credit,” Baudoin said. “But hats off to (LP). I think they did a nice job. They out-hustled us tonight and they outplayed us.” 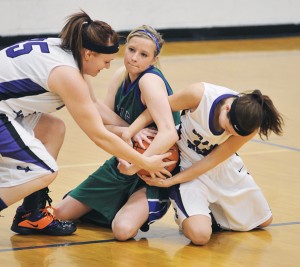 Lyle-Pacelli's Maggie Lewison, middle, fights for control of the ball with Grand Meadow's Stephanie Russell, right, and Cortney Olson during the first half Tuesday night in Lyle. - Eric Johnson/photodesk@austindailyherald.com

While LP got its scoring from its backcourt, it’s frontcourt did the hard work underneath as eighth grader Sarah Holtz scored eight points and pulled down 11 rebounds.

“Sarah’s great for us on the boards and she really does a good job,” Walter said. “Most of the time those people don’t get appreciated like they should, but I talk about possession all of the time and those are possessions for us. She’s really stepped up for an eighth grader.”

Both teams hadn’t practiced or played in four days due to weather cancellations and LP was coming off a one-point loss to LeRoy-Ostrander last week.

“It was really tough to watch how we played in that LeRoy game and it sucked not having practice for four days but it’s not really a good excuse,” Rysavy said. “It was tough to get it going, but we are a second half team.”