Kirbys see both sides of the puck 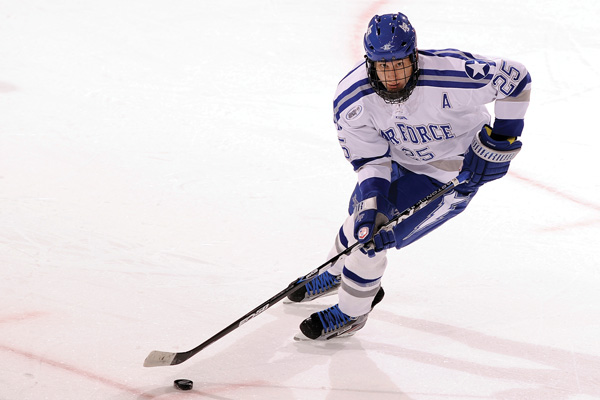 Sometimes advice from your big brother is all you really need.

Three years ago, John Kirby was ready to be done with hockey. He had just been cut from the NAHL’s Owatonna Express after a season without getting any significant playing time and he was working full-time.

But then he called his older brother Tim Kirby, who was entering his second year as a defenseman at Air Force Academy at the time.

“He was a real big inspiration,” John said of Tim. “After I got cut by Owatonna I had a big talk with him about what I can do. He told me this happens all of the time and not to let it get you down. When the Bruins came to town, he told me to try out for them and see what happens.”

John made the Bruins team and he’s leading the team with 14 goals this season. He also plans to play at the college level next season — he’s just not sure where or what level.

Tim, who was in the same predicament four years ago, hopes that John ends up playing at the Division I level.

“I’m happy he’s doing well and I want him to succeed at the DI level. From my perspective, he’s good enough. He’s a big guy and he towers over me. There’s teams that need a guy like that,” Tim said. “I hope somebody takes a chance on him like Air Force took a chance on me. Not a lot of people take chances on southern Minnesota kids, but he can play at this level. I really want my brother to succeed.”
From Austin to the Air Force

After a stellar career at Austin High School, Tim played two years of solid hockey with the Owatonna Express, but he wasn’t necessarily drawing big offers from colleges.

Then a simple twist of fate went in his favor as Austin resident Joe Serratore referred Tim to his brother Frank Serratore, who just happened to be the head men’s hockey coach at Air Force.

That lead to Kirby signing with Air Force. Frank still appreciates the tip from Joe as Tim is third on the Falcons with eight goals this season, and has 56 career assists as a defenseman.

“Joe told me how gifted Tim was as an athlete, he told me how tremendous Tim was as a baseball player and he felt Tim’s upside as a hockey player was enormous. He was right,” Frank Serratore said. “I am lucky Joe tipped off his brother who is the head hockey coach at Air Force and not his brother (Tom Serratore) who is the head hockey coach at Bemidji State.”

Tim has played so well this season that he became the third Air Force player in the past five years to be nominated for the Hobey Baker Award. Tim is one of the 77 initial nominees and he couldn’t be happier just to be named in that group.

“I had no idea (I was nominated) until my brother Dan called me and told me about it,” Tim said. “I was like ‘wow.’ It’s a very big honor to be nominated as the best player in college hockey and I couldn’t imagine anything better for my senior year. Things have been going my way and I’m getting some goals.”

Frank Serratore said that Tim has given the team a boost on all fronts.

“Tim is a electrifying offensive defenseman,” he said. “He has the ability to lift fans out of their seats when rushing the puck and he is a very special player, very gifted, and a great kid. His teammates love him and we are a better team whenever Tim is on the ice, both offensively and defensively.”

From defense to offense

John, who made the transition from defenseman to forward this season, has grown on and off the ice since he came to the Bruins. He gives Bruins head coach Chris Tok a lot of credit for teaching him so much in just two years.

“I’ve come a long way since last year,” John said. “Chris Tok has helped me a lot. He knew I would be a work in progress last year and he’s one of the main reasons I came back this year. With him, it’s not just about playing hockey, it’s about becoming a better person and I feel I’ve come a long way. I’m really glad the Bruins came to town and it was a real blessing. I feel like I just got lucky.” 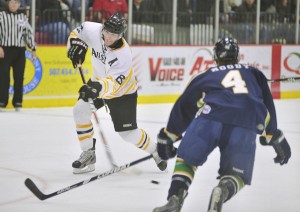 Tok said that more and more colleges are showing up at games to look at John and he’s seen a lot of improvement from last year to this season.

“Last year John brought a big fast physical presence to the ice with limited offensive capabilities,” Tok said. “He has now added a scoring touch to his game and become a top offensive threat.”

Great times with the Packers

While Tim is putting the finishing touches on a fantastic hockey career, John is hoping that he’ll be able to play at the same level.