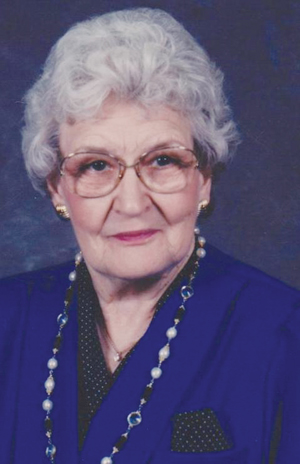 2012, at the Grand Meadow Lutheran Church with the Rev. Ann Siverling officiating. Burial will take place in the Grand Meadow Cemetery. Visitation will be held from 5 to 8 p.m. Tuesday, Jan. 24, 2012, at the Hindt Funeral Home in Grand Meadow and will continue on Wednesday for one hour prior to the service at the church.

She was born April 22, 1914, in Waltham Twp. Mower County, Minn., to Ernest and Tillie (Larsen) Anderson and was baptized on May 31, 1914, at the Zion Lutheran Church in Sargeant, Minn. Doris attended school through the eighth grade in Sargeant and graduated from Austin, High School. After graduation, she attended normal training and taught in country schools for seven years. On July 14, 1942, she was united in marriage to Henry Jacobson at the Grand Meadow Lutheran parsonage and together were confirmed and became members of the Grand Meadow Lutheran Church. Henry died Sept. 11, 1970.

In 1960, Doris started candling eggs for Farmers Produce in Grand Meadow, and in 1972 she started working for St Marys Hospital in Rochester. She worked in housekeeping at St. Marys for 15 years and later went to work and volunteer at Grand Meadow Health Care Center. She was an active member of Grand Meadow Lutheran Church where she was involved with the church circle and taught bible school. Doris enjoyed cooking, entertaining, listening to music and especially playing games and spending time with her grandchildren.

From the Institute to flood dollars