Gymnasts are looking for a challenge 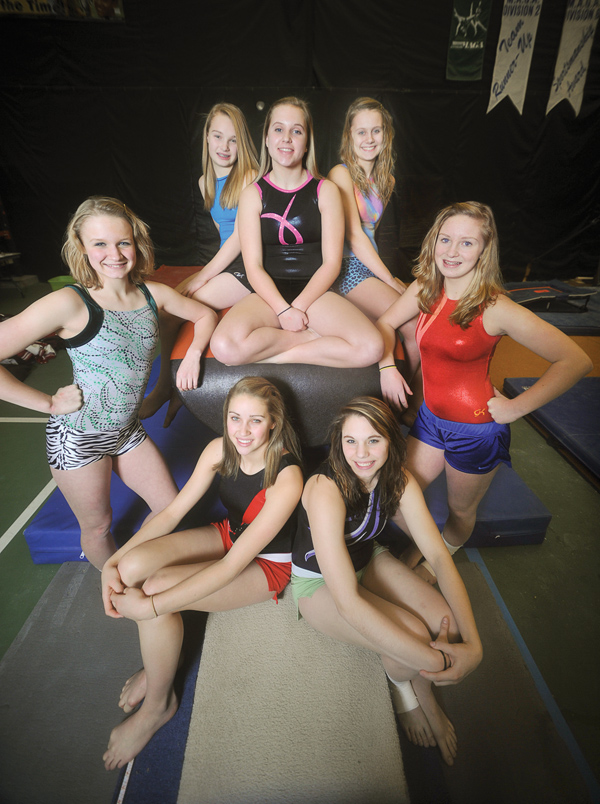 The Austin gymnastics team is looking for some competition and it’s about to get it.

The Packers have competed in three invites, one triangular and three dual meets this season and they’ve finished in first place by at least five points in all of those competitions.

Now they’re preparing for a meet where they’ll have to work hard just to finish in the top-five. The No. 5 ranked Packers will compete in the ‘true team’ Class ‘A’ state meet in Becker Saturday, Jan. 28 against the top-10 teams in Class ‘A.’

“It’s going to change a little bit here,” Austin head coach Mark Raymond said. “We’ve been the odds on favorite so far this season and it’ll be fun to be in the gym where we’re not expected to win and we have to overachieve to get out of their with what we’re going to call a victory.”

Raymond said he’d like to see his Packers finish in the top-three, but the team is mostly focused on improving on its already impressive high score. The Packers posted a 142.15 in their last meet after starting the season in the 137s.

Austin sophomore Sela Fadness is one of three all-arounders on the team and she sees room to grow with the Packers team score.

“In the week (before true team) we hope to get some skills that are almost there for some girls,” Fadness said. “We go out to every meet not overconfident, because there’s still points to be earned. But after the improvement we’ve shown, we know we can go far if we keep going up from here.”

Austin’s two other all-arounders are freshmen Abby Bickler and Carolyn Hackel. While both are young in age, they have plenty of experience as they competed in the Class ‘A’ team state meet and ‘true team’ state meet as seventh graders and they each advanced to the individual state meet last season.

“I think it’s different (this time) because a couple of years ago we were hoping that we could beat the last two teams,” Hackel said. “This year, we’re ranked and it’s a great feeling knowing that we’ll have a little bit easier time.”

Hackel knows the ‘true team’ meet will be like nothing else Austin has seen all season, and she looks forward to a meet that will push the Packers to their limits.

“It’s like a basketball game, it’s not fun unless it’s close and it’s not fun if you’re beating them by 20 points. It’s scary, but it’ll be fun and it should drive up our scores,” Hackel said. “There’s always room for improvement unless you get a 10. We’ve just got to keep working hard and keep everyone healthy.”

While Austin’s three all-arounders have provided some strong performances this season, the team is also deep at all the other spots. Senior Marissa Bartels, juniors Abby Snater and Cassidy Bawek, and eighth graders Logan Tischer and Rachel Quandt have been big contributors as well.

Bickler said the Packers are embracing the team concept and practices have been very productive.

“We started off this season pretty close, but being in the gym together every day, we’ve grown even closer,” Bickler said. “We make sure when we come to practice that it affects how we compete and (us three all-arounders) just kind of push the rest of the team to keep going and keep adding skills in every event.”

Raymond said he could probably go with a few less gymnasts and maybe have a little higher score, but he believes the more athletes that contribute, the better of the squad will be in the long run.

“I probably could get down to four or five girls if I really wanted to,” Raymond said. “But it’s been better for us as a group. We might have given up a little scoring wise, but it’s been a better team dynamic. Everybody’s pushing because everybody feels like they’re a part of it.”

Raymond added that he’s had to make some tough calls on who to put in the lineup as Austin’s JV team has been very solid this season as well.

“We’ve had lineups where we didn’t go with our normal lineup and we’ve never really taken a step back. We’ve improved every meet all year long,” Raymond said. “I’m not giving a varsity spot to anyone who doesn’t deserve it. We’re splitting some pretty fine hairs to pick the varsity lineup and we go six-deep in every event.”

Right after the ‘true team’ state meet, Austin will have its toughest dual meet of the season as Owatonna comes to Austin Tuesday, Jan. 31. The Big Nine title will likely come down to the Packers and Huskies and Fadness said that she’s looking forward to seeing where the Packers stand.

“Hopefully these next two meets show us where we are in the state and what we can do,” she said. “I know we’ve proved ourselves to be better than what we’ve expected, so if we can go out there and do some damage, we’ll know where we’re at.”