Each new year brings with it new hopes, goals and projects — not just for individuals, but also for the Austin City Council. 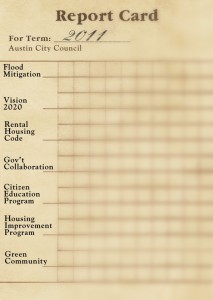 As the City Council prepares to discuss 2012 priorities, the members weigh in on how they fared on 2011’s goals. — Illustration by Eric Johnson

City Council members will spend two nights next week — Jan. 23 and 24 — developing a list of priorities for 2012 at their annual retreat.

The Herald asked Austin’s seven council members how they felt about progress made on their 2011 goals. While most agreed there is work left on the table, they feel the Council is making strides in key areas. The following are a look at areas of emphasis from 2011 and priorities for 2012.

Flood mitigation construction projects have become a part of life for Austin residents. Because of the Cedar River and many creeks winding through the city, officials have been preparing for another 100-year flood.

In 2011, construction crews installed a road raise near Kuehn Motors and Pizza Hut, an area that is known to flood, and city staff is planning to install a flood wall on North Main Street within the next two years.

Each phase of the project is dependent on the other phases, Council member Jeff Austin said, so it’s important for all the pieces to fall into place.

“I think that much progress was made on our flood mitigation efforts this year, with three more phases of the North Main Street project completed and work to continue with the additional phases in 2012,” Austin said.

Coun-cil member Steve King echoed Austin’s thoughts, adding that the next phases of the flood mitigation projects will have a wide impact on the town.

“The next phases of the plan, especially the North Main flood wall, will be extremely visible and impactful for Austin’s major employers and the residents that were directly affected by the continual flooding,” King said.

Although the city has been minimally involved in Vision 2020 — a grass roots community betterment project looking for 10 ideas to implement by 2020 — council members expect projects to trickle to them once the top 30 ideas, which were selected Thursday, are whittled to 10.

Council member Roger Boughton called the initiative a great community undertaking that will likely need the council’s financial support at some point. Member-at-large Janet Anderson said the council will evaluate how it can support the final 10 ideas once they are released.

“At that point, the City Council and staff will focus on how we can be supportive,” Anderson said. “The specifics of what that will mean for the city will depend on what projects are in the top 10.”

However, council member Marian Clennon said she hopes the city will step aside and let community organizations take the lead so some projects can be implemented without taxpayer money.

“Vision 2020 is a community project that the city government should not be an active member as was recommended by the city of Dubuque,” Clennon said.

‘The ship has seemingly sailed:’

After months of discussion and planning, many council members were disappointed when a fresh rental housing ordinance did not get approved.

The ordinance would have required rental property owners in Austin to register their properties with the city for a fee. Throughout the planning process, it became clear that there were differing views as to how much the city should require of landlords.

Boughton said he was disappointed the ordinance didn’t pan out, but if it’s brought back as a registration process only, he would reconsider it.

“It is needed not only for safety reasons but to get a handle on the number of rental units, as well as the number of people living within the units,” Boughton said.

Two heads are better than one:

Austin City Council members often discuss in work sessions the idea of collaborating with other governmental organizations to accomplish more with less funding. Their efforts in 2011 saw both success and failure.

Albert Lea and Austin partnered in March to share the services of Finance Director Tom Dankert, but the agreement only lasted a month before being discontinued.

City officials and the Humane Society are in talks to collaborate on a new dog pound for Austin, although nothing has been finalized.

Most council members indicated there are several collaborations in place already, including with the Austin Housing and Redevelopment Authority, Austin Public Schools District and several Mower County departments.

“People need to also realize that not all departments within the county and city share tasks or responsibilities,” King said. “The county is responsible for health, human services, corrections, jail administration and veteran services. … The city is responsible for police, fire, streets, park and recreation and library. This division creates a challenge when duties and expertise do not match up.”

Council members have yet to develop the city’s own citizen education program, but an event last year filled the need for a couple of weeks.

The city of Austin hosted four community conversations last summer in which area residents could chime in on taxpayer-funded services and how local governments are operated. The conversations were videotaped by the League of Minnesota Cities so city officials can learn more about what citizens desire for city services.

Anderson hopes the conversations will help direct the council toward a citizen education program.

“(The videotaped conversations) will help guide us on determining the most effective way to implement some form of a citizen education program or citizen academy,” Anderson said.

Austin can now boast of a blossoming housing improvement program, albeit not at the hands of the city council.

The Austin Housing and Redevelopment Authority took the reigns on the housing improvement program around spring of 2011, according to HRA executive director Jim Hurm. Riverland Community College partnered with the HRA to fix up houses in Austin with the help of Riverland students.

Although the program’s first house is still being completed, Hurm said the HRA is hoping the project will pick up and gain support from church organizations and other area nonprofits.

A citizen task force is working on implementing eco-friendly best practices in Austin.

The task force is thanks to the City Council approving a GreenStep Cities Task Force in July. The task force — comprised of local residents and representatives of area businesses and government agencies — meets monthly to brainstorm ways to make the city more sustainable.

The city has previously discussed using LED lighting throughout the city to decrease energy bills and waste. King said this is a topic that will be revisited.

“The expense of powering our current street lights could be cut substantially by retro-fitting LED lights and existing light poles,” he said.

“I trust our engineering department will continue to monitor this technology and advise us to make a move towards this when the benefits of retro-fitting is maximized at the smallest cost.”

Once the task force develops ideas for implementing eco-friendly practices in Austin, it will report to the City Council for further action.

Carl Shirk, left, with Gary Harrison looks to a bidder for the nod whlie auctioning a ham during the Lyle... read more