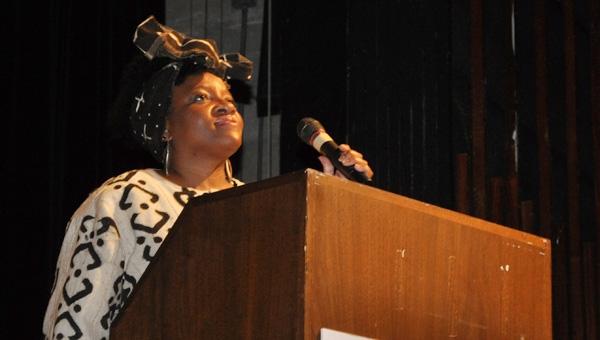 Sometimes, it takes an outside voice to let people know how to solve their problems.

That’s what Austin Area Rights Commission chairwoman Kirsten Lindbloom believes, and that’s what human rights activist Naomi Tutu did Monday night. Speaking at Riverland Community College as part of the HRC’s Martin Luther King Jr. Day celebration, Tutu called on Austin residents to work toward making their community a better place and bond with one another.

Tutu, the daughter of Archbishop Desmond Tutu, has served as a development consultant in West Africa and a program coordinator at the African Gender Institute at the University of Cape Town, South Africa. She has worked at Tennessee State University and nowadays gives about 30 speeches a year, along with consultation work.

Naomi Tutu has spoken in Austin before, more than 20 years ago when segregation in South Africa dominated the news. Tutu said people back then asked her what they could do to help. Aside from writing their congressman and petitioning for South African sanctions, Tutu encouraged people to look into their own communities for racism and prejudice. By reaching out to others, Tutu said communities move closer to King’s ideological “beloved community,” where people celebrate rather than fear their differences.

“Those differences should be for us a chance to see how amazing and wonderful our gifts are,” she said.

Lindbloom was impressed with Tutu’s speech and her call to reach out to one another, rather than set aside a single day to commemorate civil rights victories.

“She made it clear what we need to do,” Lindbloom said.

For Tutu, that means holding discussions about each person’s place in a community. In her experience, religious institutions like churches and synagogues often play a key role in that discussion.

Tutu made a similar call to speak up for human rights earlier Monday, where she spoke to a group of 2,000 people gathered at the Minneapolis Convention Center for a breakfast honoring King. There she said much work still needs to be done to achieve equality for all. Tutu called on the audience to fight for human rights.

Tutu said she continues to speak to people as she feels giving speeches is where she can best help communities. Yet Tutu said any work to address local human rights concerns has to come from residents themselves.

“Who is hungry in Austin?” she asked the audience. “Who is homeless? Who does not feel part of this community? … And what are you going to do about it?”

Tutu will speak to students at Austin High School today.

The Cedar River Watershed District may be hopping on the Vision 2020 bandwagon. Since Vision 2020 — a grass roots... read more