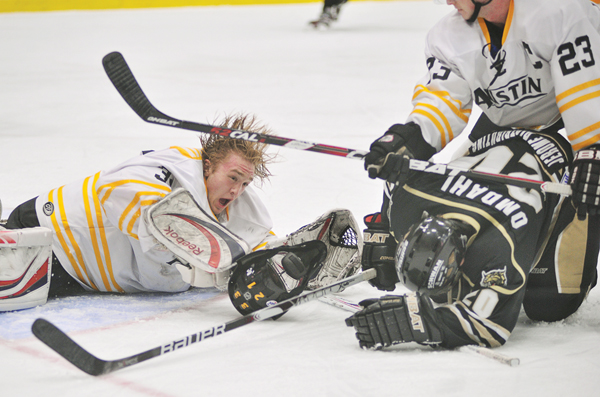 Bruins goalie Tyler Bruggeman loses his helmet during a scuffle for the puck in front of the net during the first period against Bismarck Saturday night at Riverside Arena. -- Eric Johnson/photodesk@austindailyherald.com

The first place Bobcats scored on three of their five powerplays, while the Bruins (21-14-4 overall) went just one-for-seven on powerplays.

Colton Kramer tied the game at two with a second period goal for Austin, but that would be the last time the Bruins scored.

The Bruins' Jeremy Finger carries the puck in toward the Bismarck goal during the second period Saturday night at Riverside Arena. -- Eric Johnson/photodesk@austindailyherald.com

Tyler Bruggeman allowed all four goals and had 27 saves and Nicholas Lehr had three saves for Austin.

The Blooming Prairie boys basketball team had its three game winning streak come to an end in a 75-54 loss... read more