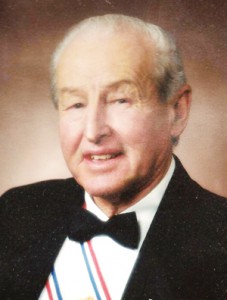 Avery John Schaefer was called home to the Lord on Wednesday, Jan. 18, 2012, at the Adams Health Care Center.

Avery was born on May 21, 1926, in Meyer, Iowa, to Matthias and Isabelle (Blake) Schaefer. He also attended school in Meyer. He served in the Army during the Korean War and after his discharge, married Florence “Flossie” Bosak on Sept. 15, 1956, in Barnesville. They made their home on a farm near Taopi.

He was a member of Sacred Heart Catholic Church, the Knights of Columbus 3rd and 4th degree, and the American Legion Post 146. He also enjoyed singing with the Forte Milers Barbershop chorus for many years.

He enjoyed working with the livestock on the farm, carpentry, hunting, playing cards and spending time with his children, grandchildren and great-grandchildren.

He was preceded in death by his parents and 2 brothers Amos and Robert.

His life will be celebrated with a funeral mass at 11 a.m. Tuesday, Jan. 24, at Sacred Heart Catholic church in Adams, with Father Thomas Loomis officiating. Interment will follow the service at the Sacred Heart Catholic Cemetery with Adams American Legion Post 146 in charge of military rites.

Visitation will be held from 4 to 7 p.m. Monday, Jan. 23, at the Adams Funeral Home, with a K. C. rosary at 4:30 p.m. and a 7 p.m. prayer service. Visitation will also be at the church for one hour before the service on Tuesday morning.