A history of song 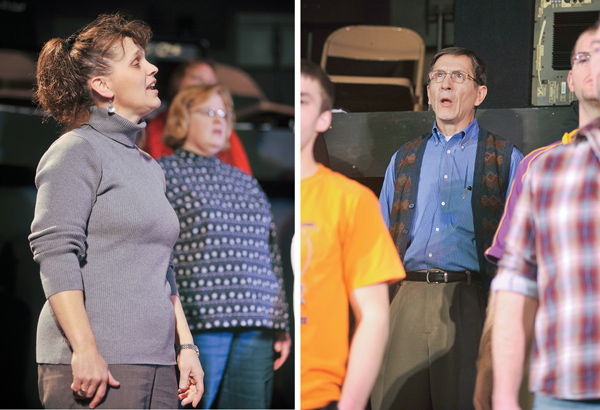 The Northwestern Singers is more than a singing group — for Faye Bollingberg and Rick Young it’s community in a community - Eric Johnson/photodesk@austindailyherald.com

If there is one prevailing theme among the singers making up the body of Austin’s Northwestern Singers, it’s that there is a feeling of family.

Rick Young and Faye Bollingberg have been a part of the family longer than most, having both been performers in the group for more than 20 years.

This Sunday, they were on stage again with their singing family, performing in the group’s winter show at the Paramount Theatre.

It was a perfect place to find out what drives them both through the practices and performances of one of Austin’s most cherished singing groups.

Music has always been a part of Young and Bollingberg’s lives and so the progression to the Northwestern Singers when they came to Austin seemed natural.

Rick, who has been involved in music for almost 55 years, joined the group 22 years ago when he moved his family from Iowa.

“I heard them that first year and was excited by what they are doing,” Young said. “A friend of mine got me in and I’ve never left.”

Bollingberg followed nearly an identical path in joining the Singers 20 years ago. She moved to Austin in 1991 right out of college. Soon after she had taken her love for music to the Northwestern Singers.

“It’s a great way to get involved in the community,” Bollingberg said as she looked back to when she first joined.

“You work all day, so it’s nice to have a little outlet.”

In the same way the Northwestern Singers consider themselves like a family, they see themselves as almost a microcosm of talent within the whole of the community.

It is rare for communities to have their own singing groups, and the Northwestern Singers certainly don’t take what they do for granted. They certainly can’t say enough about the talent within the group.

“Music is always exciting,” Young said. “There’s such a wide variety of talent from people in their 80s to those just out of college.”

Along those same lines, Bollingberg said, “It’s such a wonderful community organization. It represents a lot of people in Austin.”

In the opinion of both Young and Bollingberg, singing in general is a reward and a pleasant break from the day. A distraction from the hectic schedules and an escape to something uplifting.

“It’s a stress reliever,” Bollingberg said. “It’s a break from the normal routine. I get to be with people I typically don’t work with.

“I definitely think it’s a great opportunity to get to know people.”

But music is more than just an escape from the rigors of the day and the reward can go further than individual reward for getting to sing.

The reward comes from seeing the audience react and enjoying themselves throughout a show.

“It’s a reward of having the audience respond to what you’re doing,” Young said. “Putting it all together is extremely rewarding.