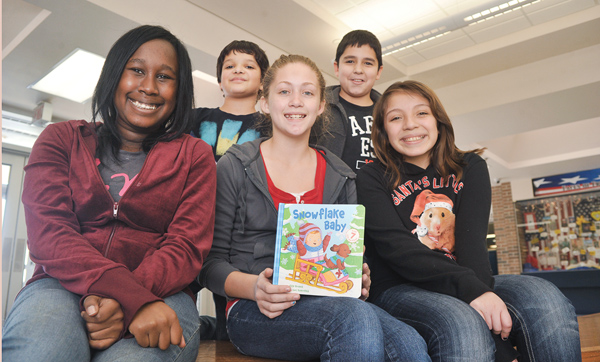 Ellis Middle School will give new opportunities to new life.

That’s how Ellis students feel as they work to collect a year’s worth of birth to age 5 books for local newborns.

“The more (babies) read as they’re younger, the better habits they get,” said seventh-grader Taty Chol.

Chol is part of the Culture Club, a three-year-old group at Ellis with more than 70 members. They’re the driving force behind Ellis’s book drive, which the school is taking on as a service project for Martin Luther King Jr. Day.

“There’s been quite a good response from the public and the kids,” said Jennifer Gosha, Ellis teacher and equity team member. Gosha and fellow teacher Hiedy Morey presented Ellis’s project at the Austin Human Rights Commission’s Martin Luther King Jr. Day celebration Monday. The idea is to give a newborn baby a book when they leave Mayo Clinic Health System in Austin so parents can start reading to their children.

“It’s so important to read at an early age,” said Lydia Morey, sixth-grader.

The students agree that people have stepped up to give already, despite the drive beginning this week. One sixth-grader gave 72 books to the cause and Ellis students collected $178 during the HRC celebration Monday night. Ellis students will compete with each other to win a Kindle Fire and among their grades to win a pizza party as well. That’s not the main reason Ellis students are excited about the drive, however.

The book drive will take place until March 2. Residents can drop books off at Ellis or at Sterling Main Street, where there is a display for books. Residents can also mail books to Ellis or give them to Ellis students, who will receive credit for the books and more opportunities to win the Kindle Fire.

Yet the students will take away more than just prizes. Some of them already understand what this service project means, especially in light of King’s service.

“Without him doing what he did, we would still have segregation,” said Kayen Salinas, sixth-grader.