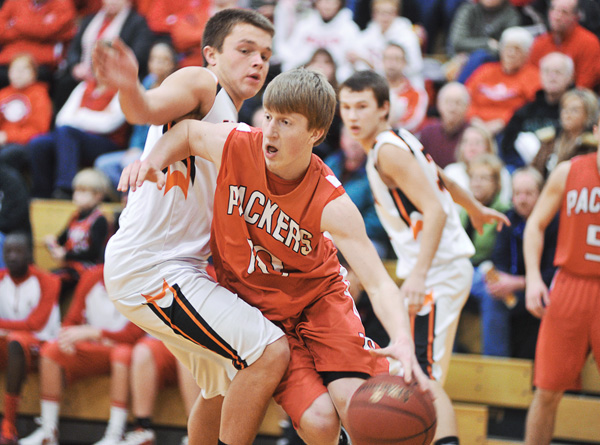 After allowing Winona to hang with them for the first 10 minutes, the Packers put the pedal to the medal and came up with a 77-55 win over the Winhawks in Packer Gym Tuesday.

Winona’s Will Leaf hit a three-pointer that made it 23-22 Austin with 7:18 left in the first half and the Packers responded with a 22-0 run over the next six minutes that put the game away.

Joe Aase scored nine of his 26 points during that rally as he put together an array of post moves and outside jump shots.

“The guy guarding me was strong, but he was a little bit smaller and they weren’t really doubling me too much in the first half,” Aase said. “It was just easy money.” 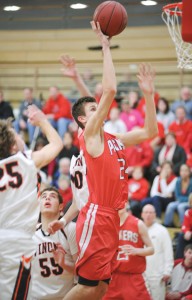 Austin's Tom Aase goes up in traffic during the second half against Winona Tuesday night in Packer Gym. - Eric Johnson/photodesk@austindailyherald.com

The Packers (10-3 overall, 7-1 Big Nine) started to shut down Winona (5-8 overall, 3-5 Big Nine) when they defended the three point line and forced outside pressure.

“We’re getting better with our press,” said Austin guard Zach Wessels, who had 14 points, six rebounds, four assists and three steals. “It was tough tonight because two or three of (Winona’s players) shot from the volleyball line. We had to run from half court and back to the block, but (Nate) Schwab, Zach (Vierkandt), Bret (Lukes) and Collin (Weisert) did a great job.”

The win keeps the Packers tied for first place in the Big Nine with Owatonna, but Austin is about to see some big tests as its next four games are on the road.

“If the Mayo game taught us anything, you’ve got to go play every game,” Fadness said. “You can’t take a night off. Our biggest competition is ourselves and we have to make sure we have energy and do what we do well.”

Aase said the Packers haven’t been fazed by the target that comes with being at the top of the conference.

“We’re going to get people’s best games every night. It’s a nice feeling,” he said.