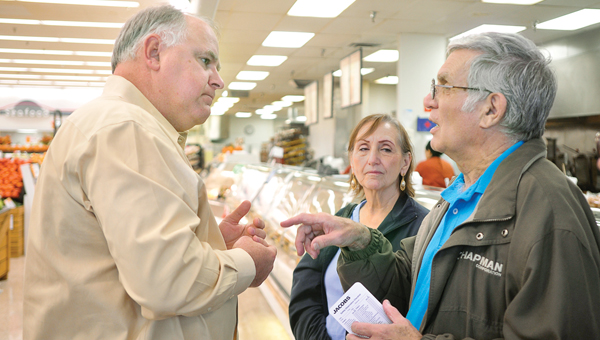 U.S. Congressman Tim Walz talks to Leonard Germer from Austin during visit as part of the Congressman on the Corner, at Hy-Vee. -- Eric Johnson/photodesk@austindailyherald.com

One thing was clear Tuesday morning as Rep. Tim Walz walked into Austin’s Hy-Vee to greet his constituents — people were upset about the direction the country is heading.

“Our fathers left us a legacy and it’s gone now,” Austin resident Gene Novack said. “We need to get back to the basics.” 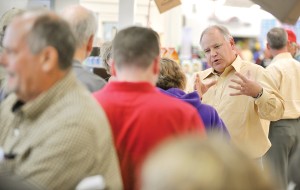 Constituents of U.S. Congressman Tim Walz line up to talk to him Tuesday morning.

Novack was one of several people who wanted to talk to the democratic congressman. Novack’s main concern is taxes.

“They’re not saving us any money,” Novack said of the federal government. “It eventually trickles to the city, where our taxes go up.”

“Get Immigration and Customs Enforcement in here to do its job, and we won’t need to spend money on a new school,” he said.

Others lining up to talk to Walz were concerned for their businesses. Larry Hirndierks and Mike McCormack of Albert Lea attended to voice their concerns for diseases infecting corn and soybeans. Both men work in the agricultural fertilizer business.

“We’re concerned with the quality of food and the nutritional value,” McCormack said. 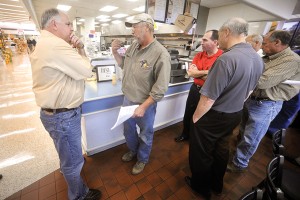 The men said their goal is to set up a meeting with Walz, but for now they simply want him to listen.

Walz said the main goal of his Congress on the Corner meet and greets is to listen to his constituents and take their concerns back to Washington, D.C.

“(I’m here) to try and explain if there are specific questions about legislation — to inform people,” Walz said. “We want them to have faith in the system.”

Walz said some of the political sparring in Washington could be alleviated if legislators simply “go about the issues” in a more reasonable manner. Legislators and constituents alike need to be “engaged” in the governing process and willing to compromise, Walz said.

Walz said non-partisan redistricting and campaign finance reform will be key factors in reducing political polarization in the future.

“When you come from a safe democratic district, no one’s going to beat (House Minority Leader) Nancy Pelosi,” he said. “What ends up happening is you get districts like this where it’s moderate and you get polarization.”

Despite being a member of the opposing political party, Mower County Republican Chairperson Dennis Schminke attended Walz’s stop to bring his worries to the congressman.

“I want to express my concern that the U.S. not go any further down the path of Greece,” Schminke said. “We’re hemorrhaging red ink.”

Schminke said he wants the government to begin spending within its means and giving the American public a reason to have faith in it.

“My biggest concern is returning the economy to a 3.5 percent annual growth, and I think the largest impediments to that are regulatory uncertainty and tax uncertainty,” he said. “Companies don’t know whether to invest or not to make projects happen.”

Walz said he hopes to return that certainty to Americans by talking with his constituents one-on-one about their fears and carrying their message back to the capital.