Self-taught band plays it by ear

Eleven years ago, three men started a band that has been going strong ever since. But they’re not rocking concert halls or hitting venues every night — their venue is a church. 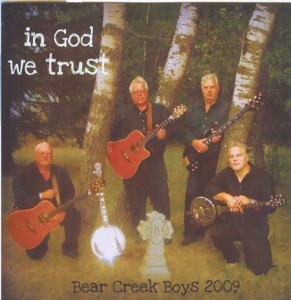 They are the Bear Creek Boys, a country gospel band that plays about once a month for Bear Creek Lutheran Church in rural Grand Meadow.

Arvin Ringen, Duane Milburn, Howard Jensen and the newest member, Bruce Speer, have a passion for music. However, they go about playing it in a different way than most bands.

“None of us can read music,” Ringen said, who started playing guitar when he was about 24 years old.

Ringen and the band have all played music for years; but instead of reading notes, they listen for the notes, feel the chords and figure it out on their own. The band started as three Bear Creek Lutheran members in 2000. Bruce Speer joined the group several years ago. And according to Ringen and Milburn, Speer especially has a knack for playing by ear.

“He doesn’t even know what key we’re in,” Ringen said.

Early on, the group produced its first CD, mainly for Sunday School. However, they’ve since produced two other CDs, one in 2006 and one in 2009.

When they produced their 2006 album, with songs such as “Go Tell it on the Mountain” and “Swing Low,” they didn’t waste any time.

“We made it in one evening — six hours,” Ringen said.

Since then, the band acquired better recording equipment and records a cleaner sound, which can be heard on its 2009 album, “in God we trust.”

But if people thought the Bear Creek Boys were raking in profits off their gospel hits, they’d be wrong.

“Everything we make goes back into the church,” Ringen said.

Part of the Bear Creek Boys’ new venture is playing at other churches.

It wasn’t something they wanted to dive too deep into, however, as Ringen and the group didn’t want to be drawn away from their home church. Yet the group is playing this Sunday at St. Olaf Lutheran Church in Austin for one reason.

Among St. Olaf, the group has decided to auction off one of its concerts for a friend’s gathering, and it will play at Mabel Steam Engine Days on Sept. 4. All of the proceeds will go back into Bear Creek Lutheran Church. And the humble singers feel no better anywhere than playing right at their own church. After playing there for years, music has only gotten easier and more enjoyable for them.

“It’s awesome,” Milburn said. “When you’re playing in front of people you know … you’re not worried about being perfect.”

Faith is written on the palms of their hands