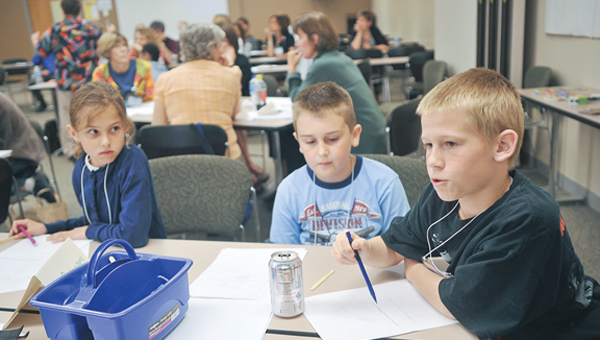 Noah Klocke, from right, Nathan Meyer and Madison Herrick hash out a problem during an exercise called the Square Root of Fun Tuesday during a math camp during the Gifted and Talented Symposium at Riverland Community College. -- Eric Johnson/photodesk@austindailyherald.com

The impossible is happening at Riverland Community Campus this week.

While the third annual Gifted and Talented Symposium goes on, there’s one session that’s doing remarkable work: Someone is making elementary students like math.

Rachel McAnallen’s Math Camp is making a debut at the GTS, although McAnallen has run the program for 27 years in the U.S. and internationally. When she speaks, students listen. 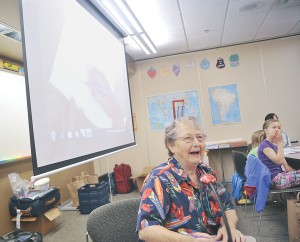 Rachel McAnallen leads kids involved with a math camp through a problem during a Gifted and Talented Symposium Tuesday at Riverland Community College. - Eric Johnson/photodesk@austindailyherald.com

“The way your teachers are teaching math is wrong,” she told a group of about 25 students, from third-graders to sixth-graders, as well as the 22 teachers, parents and administrators sitting in the back of the class Tuesday morning. As the adults watched, she demonstrated how to properly subtract numbers without confusing students, treating each place value as its own equation (in an algebraic way) instead of using the more popular “slash” method of factoring out.

“All I was doing was respecting the decimal point,” McAnallen said. McAnallen holds a doctorate from the University of Connecticut and has taught math, served as a school board member and worked as a high school administrator for more than 50 years. It’s clear by the way she treats students and teachers she has a passion for mathematics.

“I love (math) so much,” she said. “I want other people to love it and to have a passion for it.”

“I like math a lot better now,” said Thomas Berglund, 10, who said he wasn’t a fan of the subject before he signed up to take the Math Camp.

The Math Camp came to Riverland after McAnallen, who’s been to every GTS in Austin thus far, met with John Alberts, Austin Public Schools director of educational services over lunch at last year’s GTS. The prospect of seeing an educational seminar was very enticing to GTS organizers.

“There’s an opportunity here where you can actually see students experience what you’re hearing about,” Alberts said.

Teachers, for their part, enjoy the seminar as well. As McAnallen showed the class how to fold origami (learning about geometry at the same time), teachers tried to keep up, folding paper like the students were.

“It was fantastic,” said Ellen Paulson, an elementary teacher at Nerstrand Charter School in Faribault. “I walk away with practical lessons on hand that I can use in the classroom.”

Alberts said GTS organizers would love the Math Camp to continue at the GTS, as the program is very well received this year. Parents came to class early Tuesday morning to see what got their children so excited, and McAnallen said she’s had previous Math Camp participants come back to help teach other students whenever she holds a Math Camp in the same place for several years.

“Learning doesn’t have to be painful,” she said with a smile.