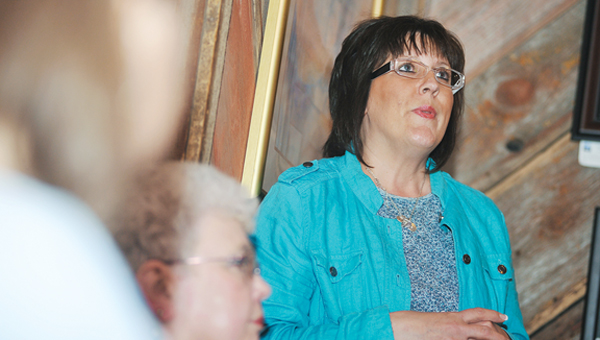 Shan Kehret tells a meeting of the Community Against Bullying group Thursday night about her own son's story and how he was bullied in school. -- Eric Johnson/photodesk@austindailyherald.com

The Community Against Bullying is coming up with some serious ideas to address harassment in Austin, including training recommendations for teachers and Austin Public School staff.

The group met Thursday to discuss initiatives and goals, bringing up future events like a parent-chaperoned middle school dance in late October and the need for local sponsors to help pay for bullying bands and national speakers.

“If something is not happening, it isn’t changing the situation,” said Danielle Borgerson-Nesvold, CAB chair. 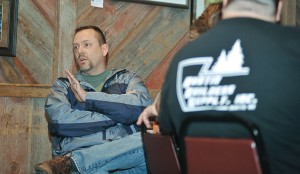 Neveln Elementary principal Dewey Schara talks about the roles of the school district in helping to curb bullying during a meeting of the Community Against Bullying group at Ruby's Place Thursday night. - Eric Johnson/photodesk@austindailyherald.com

One of the major discussions involved forming a parent committee that would speak to district officials about what sort of training they wanted teachers to have. The proposal came after Shan Kehret, owner of Ruby’s Place, told group members about her son Colton’s struggles with a teacher at Ellis Middle School.

“I don’t want any other parent to go through this,” Shan told the group.

According to Shan, Colton wasn’t a troubled sixth-grade student, but had stayed behind after school one day last February to work on homework in a study hall. A teacher told him to get on the after school bus instead of waiting for a relative to pick him up. Since the Kehret’s don’t live within city limits, the after school bus wouldn’t have dropped Colton off anywhere near his home. Colton told the teacher he couldn’t get on the bus, but the teacher told him to anyway. He was dropped off more than a mile from his home in the February cold without hat or mittens, and was eventually driven home by a family friend who spotted him along the road.

After speaking with the teacher and Ellis Principal Katie Berglund, Shan thought everything would be okay. Yet Colton began to show anxiety whenever he would go to school, would toss and turn in his sleep, and started telling Shan he was a bad kid.

“I saw our little boy … just going into this shell and his spirit was broke,” Shan said.

Shan started keeping track every time Colton said he’d had an issue with the teacher in question. She eventually contacted a school board member and set up a meeting with Superintendent David Krenz, who she described as “very compassioniate,” and very understanding to her needs.

Shan said she’s satisfied with how the district handled her situation and she doesn’t think Austin teachers would purposefully target their students. She did say she didn’t want Colton to have the emotional issues she says he acquired after going through half the school year feeling bullied by one of his teachers.

“Kids do the same thing but adults can do it too,” Shan said.

That’s why Borgerson-Nesvold, board member Kathy Green and Neveln Elementary School Principal Dewey Schara reviewed the proper steps at the meeting for a parent to take when their children are confronted by bullying. By keeping records of when a child is bullied, followed by contacting a child’s teacher, principal, the superintendent or a school board member, parents can easily speak with district officials and prevent situations like what happened to Colton.

“Bullying is in the eye of the victim,” Schara told the group.