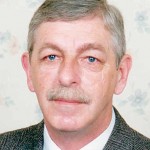 Richard was born Oct. 12, 1942, in Austin, to Kenneth and Marian (Laufle) Fraser. He graduated from Pacelli High School in 1960 and then attended Austin Community College and Austin Technical College. On Jan. 20, 1973, he married Joyce at the United Lutheran Church in Frost, Minn. Richard was in the U.S. Army. He worked as a custodian and was a member of the American Legion Post 91 in Austin. Richard enjoyed playing cards and games with his family. He also loved music, books and astronomy.

The family will greet friends from 4-7 p.m. on Wednesday, March 16, at Mayer Funeral Home. Interment will be in United Lutheran Cemetery in Frost.