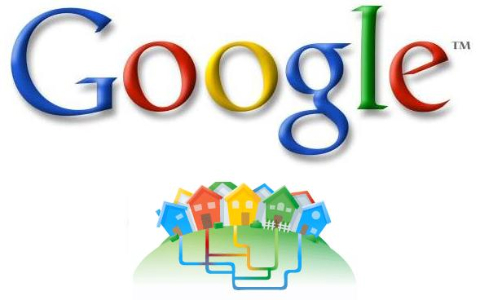 Google blogged Wednesday that it agreed to bring Google Fiber ultra high-speed Internet to Kansas City. Austin had just broken the top five and ranked fourth in community support on www.fiberforall.org, right behind Duluth at third.

Yet the rankings didn’t really matter. According to an e-mail sent last month by Dan Martin, a spokesman for Google, the Fiber For All poll didn’t factor into Google’s decision. 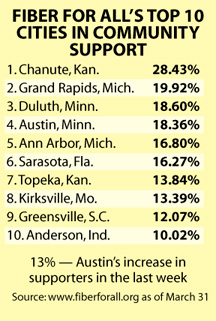 “Our decisions will be based entirely on the responses and data we’ve gathered from our request for information, and not on any unofficial online polls,” Martin said.

That doesn’t mean the efforts by the Google Austin committee, also called the “We Gig It!” committee, were for naught. According to Craig Hoium, Austin’s planning and zoning director, Google representatives told the committee in early February that because there were so many applications, Google could select other communities to take part in Google Fiber as well.

“The information that we have is there is a fairly strong possibility that they could select other communities,” Hoium said.

According to Hoium, Google representatives were expecting about 300-400 applications, not the 1,077 they received when the contest started last spring.

Google Austin members decided to renew their campaign after hearing Google had extended its application deadline. In recent weeks, they’ve conducted a pep rally at Austin High School and printed up T-shirts to give to community members. Even though Kansas City was selected, Google Austin members still want the community to show their support by going to www.googleaustinmn.com to write their testimony, which they believe Google will take into consideration if they choose more communities to get Google Fiber.

Hoium and the other committee members know how important getting Google Fiber is. Having fiber optic Internet would mean online capabilities that are more than 100 times faster than current broadband and wireless speeds. It would mean incredible infrastructure opportunities for businesses and government bodies.

“It would be just a huge plus for the community, for businesses, for educational tools,” Hoium said.

No one knows when or whether Google will contact more communities for Google Fiber. Kansas City is expected to be running on Google Fiber by the end of the year. Past that, all the Google Fiber applicants will have to wait to hear Google’s next decision.

“Basically, when we hear something from them, we’ll hear it when we get it,” Hoium said.