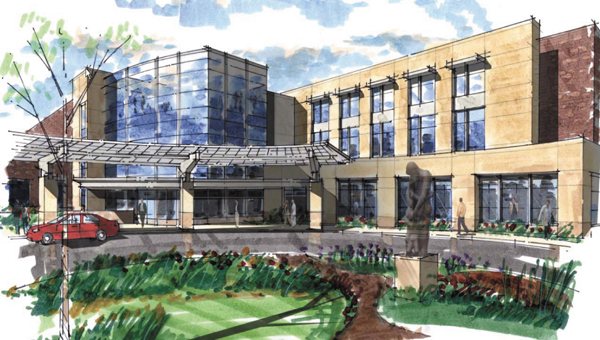 The face of healthcare in Austin is changing.

An approved 86,500-square-foot, three-story expansion to Austin Medical Center will do more than provide additional space — it will create an atmosphere based on comfort and patient accessibility.

Gone are the days of bleak hospital settings. Now, the emphasis is on comfort and creating an atmosphere more similar to home than an institution.

AMC’s $28 million expansion, set to begin this summer, will attempt to deliver just that. In the process, it will open up positions to nine physicians and 63 additional full-time health staff roles.

The project will create more resources for patients and connect those services for overall comfort care, allowing some who now travel to Mayo Clinic in Rochester to stay in Austin, said the hospital’s CEO Dr. David Argerter.

“It’s a real positive for the community,” Argerter said.

Patients who walk into the new facility will meet in “huddle rooms,” spaces tailored for those who wish to discuss their health with both professionals and family members.

Project Manager Rod Nordeng describes the two areas where such rooms will be located as “neighborhood floors.”

The whole comfort concept behind the expansion has played an integral role in the logistics of the project. Proximity among departments that may see the same patients will be located next to one another.

“This really impacts how we designed two of our floors,” Nordeng said.

The lower level of the building will include a musculoskeletal center with services relating to orthopedics, sports medicine, a pain clinic, podiatry and rehabilitation.

The Specialty Clinic will be redone and moved near General Surgery. Family Medicine will expand on the second floor, while the existing primary care space will be renovated to cater to projected growth. The second floor will also accommodate the Cardiology Department, which will expand, and a sizable waiting area for patients.

The OB/GYN Department will move to the third floor, along with the Pediatrics Department and Finance and Administration.

For convenience, the first floor will add an eye clinic, as well as a new Mayo Clinic retail and pharmacy outlet. The cafeteria will also see an extension, something that hasn’t happened since 1938.

The entrance area will now also include a main desk in the middle of the front hall for volunteers to greet patients, staff and visitors.

During the course of construction, the primary patient parking lot near the front entrance will be affected, but hospital administration are working on ways to accommodate visitors during that time.

The entire project, which includes an addition, major renovations and minor renovations, is expected to be complete in two to three years, Nordeng said.

For the community as a whole, Argerter said it will be a tremendous boost to Austin’s overall portfolio.

“It provides another reason for people to come and live in Austin,” he said.

Fundraising for the hospital will kick off within the next few weeks. Details will be released as AMC prepares to announce its official fundraising kick-off.