The organic art of movement 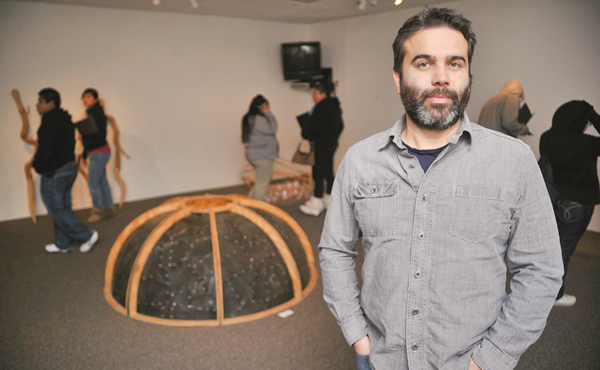 Alonso Sierralta stood before a group of high schoolers in the midst of his artwork at Riverland Community College during the school’s Multicultural Fair. Taking a breath and greeting the students, he began talking about where he came from.

He was 14 when he first came to this country, moving from Chile with his mother and siblings and literally just a couple of suitcases. The move from one way of life, one world to another, would permanently change and influence the way he looked at life and at art.

“It was a huge impact on myself and my family,” Sierralta said. “I have two siblings and a mom, and it affected us greatly, both in a good way and in a bad way. It’s not an easy thing to do to pack everything you own.”

Sierralta, now an art professor at Concordia University, loaned his art out to Riverland’s James Wegner Art Gallery for the past month in an exhibit called, “Migrations: Sculpture by Alonso Sierralta.” The exhibit will closed Friday, but the themes Sierralta uses in much of his work emanate with the community here in Austin. 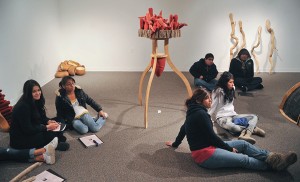 Students visiting Riverland’s recent Multicultural Fair sit around one of Alonzo Sierralta’s works, listening as the artist tells them about himself and his work. - Eric Johnson/photodesk@austindailyherald.com

“(The U.S. is) the place to be if you want to expand your horizons per se,” Sierralta said.

Once he got married, Sierralta and his wife knew they wanted to move away from Nebraska. They wanted to get out and make a change, while at the same time finding a welcoming art community in the Midwest, where they would be close to family. Kansas City didn’t have a lot of opportunities for artists, whereas Chicago seemed too open to artists, and there was a good chance they would be swallowed up in a sea of art.

The Twin Cities area seemed to make sense for Sierralta and his wife, who teaches foundation classes in design, drawing and painting at the Art Institute of Minnesota. It had opportunities and venues for artists, and several opportunities to teach.

“It just makes sense, and we liked the Twin Cities so we just packed our bags and came here,” Sierralta said. “In retrospect, it’s somewhat similar to the earlier experiences in moving from Chile, just not as dramatic.”

It was those early experiences that led Sierralta to work with sculptures, which he usually puts together using wood and resin while adding many natural and organic materials, such as seeds, grass, roots and other things.

Among his favorite spots for finding sculpture materials is along the Mississippi Riverbanks, but his students have found odds and ends over the years for him too.

“It’s a pretty wide range of material,” Sierralta said. “Every sculpture, every project is a little different.”

Migration and moving from one place to another plays a large role in Sierralta’s work. One of the pieces on display at Riverland’s art gallery, “Telemonge,” is named after a Chilean slang word that essentially means the nuts and bolts, or the root, of something. It’s also a portmanteau of two Spanish verbs which mean to drive and to knit.

The piece, which resembles tree branches growing out of an overturned basket, essentially started from an oddly shaped tree trunk a former student of Sierralta’s gave him. The branch-like tendrils stemming from the basket are actually poured resin instead of wood, Sierralta said. The impression it gives is slightly unsettling as the tendrils are, “oddly anthropomorphic sense to it, as though it were a figure bound up inside” the weave, Tim Jones, the director of Riverland’s art gallery said.

Yet Sierralta doesn’t always work with themes of migration. He likes to work on formal sculpture concepts dealing with form, shape and volume. His art mirrors work done by artists before him, such as David Nash’s and Richard Deacon’s several decades ago.

“If you talked to a contemporary art curator, they’d say I’m a little behind the times,” Sierralta said. “But that doesn’t bother me. I like what it does for me when I explore the material.”

Although Sierralta’s work will be gone from Austin, he has several exhibitions lined up over the next couple of years, including Salon Lili in Minnetonka, the 801 Washington Lofts in Minneapolis and the Phipps Center for the Arts. He’ll also continue to toil away in his studio, coming up with intriguing, thought-provoking sculptures.

“It’s not abnormal for a practicing artist to be prolific,” Sierralta said. “I enjoy it a lot, that’s just the bottom line, I really love what I do.”

Point across: HBO building an empire