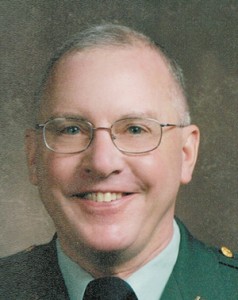 A native of Florida, David began active duty May 11, 1975, in the United States Army upon graduation from Stetson University, Deland, Fla. One of his first duty stations was Ft. Knox, Ken. David completed his Masters degree in Human Resources Management from Golden Gate University. His career in the Army involved many assignments in various positions within Military Intelligence. Col. Meriwether attended the Naval Command and Staff College in Newport, Rhode Island in 1988. Following graduation, he once again was assigned to Ft. Knox as Intelligence Officer for the 194th Armored Brigade. He subsequently was assigned to the Army Acquisition Corps where he served as Project Manager and ultimately Program Manager for development of various Intelligence and Electronic Warfare Systems. His work on these systems primarily was while on duty at Vint Hill Farms Station, Va., National Security Agency, Ft. Meade and R&D Center, Comm. & Electronic Command, Ft. Monmouth, New Jersey.

Col. Meriwether retired from the Army Dec. 31, 2001. He remained in Elizabethtown working as a Concept/Doctrine Writer at Ft. Knox until June, 2008, when he retired from civil service. David was a Kentucky Colonel.

Col. Meriwether was passionate about being a soldier in the U.S. Army. He loved his country, and he loved his family. He will be greatly missed by those whom he loved.

Col. Meriwether was preceded in death by his grandmother, Mrs. Lela Walker and his father-in-law, John D. Brady.

A graveside service will be Monday, Dec. 20, 2010, at noon at Kentucky Veterans Cemetery Central with Lt. Col. Boulwarer officiating. Visitation will be from 10 a.m.until 11:30 a.m. on Monday at Brown Funeral Home.