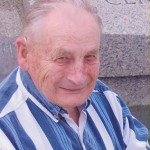 He was born Feb. 17, 1920, on the farm west of LeRoy, Minnesota, to Arthur and Martha (Reetz) Nagele. He was baptized at West LeRoy Lutheran Church and was a member of the LeRoy Lutheran Church. He attended a country school just 1.5 miles north of his home through the eighth grade. Arnel was always a farmer. He went into the army on Jan. 13, 1942, at Fort Snelling and then on to the Aleutian Islands. He was a cannoneer there, manning the big guns. He also trained at Washington, California and Texas until his honorary discharge on Nov. 26, 1944. He returned to the Nagele farm and then worked at the John Deere Tractor Plant in Waterloo, Iowa. He knew then that the manufacturing job was not for him as farming was in his blood.

On May 2, 1954, he married Madonna Dillon at Emmanuel Lutheran Church in St. Ansgar. They moved to their farm 2.75 miles south of Taopi, Minnesota, where they still live. Arnel’s great life was built around God, family, friends, farming, John Deere tractors, old cars, travel and antiques. He also loved to talk about his World War II experiences and collect articles on this.

Arnel was active, getting around with his walker until his fall breaking his right hip. He was hospitalized Nov. 12, 2010, in the Veteran’s Hospital, having two surgeries on his hip. His long battle with prostate cancer came to an end at 3:15 p.m. Saturday when he went home to be with God where he is now at peace from the battles of life.

Funeral services for Arnel Albert Nagele will be held at 1:30 p.m. Wednesday, Dec. 22, 2010, at the LeRoy Lutheran Church with the Reverend Joanne Nagele officiating. Burial will be in the church cemetery. Visitation will be held Tuesday, Dec. 21, 2010 at the Hindt Funeral Home in LeRoy, Minnesota, from 5 p.m. to 8 p.m. and one hour prior to the service at the church.

Arnel was the kindest husband, father, grandfather and great-grandfather with his kind smile and sparkling blue eyes. God bless his memory. Condolences may be left at www.hindtfuneralhomes.com.