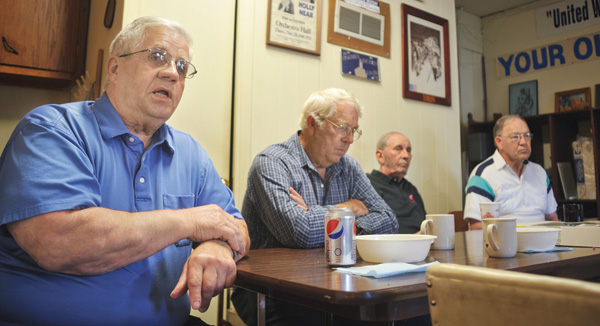 Bob Taylor, from left, Olgar Himle, Ken Dalagher and Dave King meet with others who took part in the Hormel strike twice a week at The United Support Group. --Eric Johnson/photodesk@austindailyherald.com

Inside the back door of a quiet and unassuming building, near the corner of 10th Street and Fourth Avenue in northeast Austin, one can still hear the rumblings of an era 25 years past.

Inside these walls — tacked with newspaper clippings, vintage posters and framed photos — gray-haired men often gather, put the coffee on and talk about the past underneath a mounted white wooden sign that reads in red: “Best Workforce Hormel Ever Had.”

This is the meeting place of The United Support Group — a band of defeated ‘P-9ers,’ their wives, children and supporters.

These former Hormel meatpackers were among about 1,500 members of the United Food and Commercial Workers Union, Local P-9, who walked off the job in August of 1985 in response to a looming 23 percent wage cut and unfavorable working conditions.

Today, some of the strike’s veterans and their brethren still meet twice a week to talk about labor issues of the day — refusing to forget their own fight with the same vigor that they protested shrinking pay and plant conditions 25 years ago.

Richard Lee worked for Hormel for about 40 years. He retired on disability shortly after the strike and — sitting with friends in The United Support Group hall earlier this 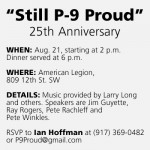 month — he rattled off a list of dangerous jobs he worked in the hog kill.

Lee stood in lines pulling leaf lard out of freshly killed hogs, stripping brains from split heads, plucking shards of bone from tissue and pulling pituitary glands to reserve them on dry ice.

Lee once sliced his hand — in between his thumb and index finger — clear through tendons and nerves. After six weeks off the job, he returned to have a co-worker accidentally nick his arm that very first day back.

“It was hard work, bloody work. You needed strong hands,” Lee said. “But it was good pay — and if you didn’t screw it up, you had a job for life.”

That was the consensus among about 10 former Hormel meatpackers who met at The United Support Group clubhouse last week — Austin meatpacking jobs meant difficult but well paid, sought after, stable work in their day.

Rex Machacek worked at Hormel for almost 30 years before the strike. Because his father had worked at the plant, he was able to get a job in the business office right out of high school.

“You had to know someone to get a job there. Everyone that worked around town would quit their jobs if they could get in at Hormel,” Machacek said.

Machacek worked in the office for 12-and-a-half years, all the while vying to move to the packing plant where employees were unionized and the pay was better.

“It was a different kind of work, and you had to take what was available,” he said, noting he worked a variety of meatpacking jobs, including flushing chitterlings.

Though the work could be unpleasant, said Olgar Himle, who worked at Hormel for 38 years in dry sausage, it was a mutually beneficial for the employees and the company.

Himle characterized the majority of his career with Hormel as symbiotic — the company took care of its workers, and in turn, the workers took pride in the well-being of the company.

“Jay C. Hormel was for the working person,” Himle said, citing the Annual Wage Plan that the son of the company’s founder, George A. Hormel, implemented more than 50 years before the strike.

Under this plan, employees were paid weekly — while their hours fluctuated according to need — and they were guaranteed 52 weeks’ notice before termination of employment.

The plan — along with profit sharing, merit pay, a pension plan and a joint earnings plan — had been introduced by Jay C. Hormel following a three-day labor strike in the 1930s.

“When we moved to the new plant (1982), it was like working for a different company,” Himle said. “I used to say they must have been bringing a load of dirt out to Jay C. Hormel’s grave every week, because he must have been spinning.”

The strike according to The United Support Group

According to a number of active United Support Group members, the actions of Hormel in the late 1970s and 1980s were nothing but a strategized union-busting campaign.

Ken Dalagher, who worked as a scale mechanic at Hormel for 38 years, said he began to see the union challenged when he — with his 30-some years of seniority — was told he must use his vacation time in the winter months.

The downfall started, many members argued, when Hormel hired a legal team and asked its workers to give up their incentive earnings so that a new plant could be built.

The workers complied, and agreed not to strike for three years after the plant was built, in good faith that they would be paid back and the new plant would be beneficial to the future of the company — and thus the workers, said Judy Himle, Olgar’s wife.

When the new plant opened in 1982, staffing and safety features were not acceptable to many workers and when Hormel announced wage cuts the workers began their campaign.

Ardel Gorman, who spent years working in a Hormel grinding room and dry sausage department, was in the midst of a three-year apprenticeship in the meatpacking shop when contract negotiations with the Local P-9 collapsed in 1985.

Gorman said he never fathomed that after he walked out of Hormel that August day he would never go back. He and other members of The United Support Group said that 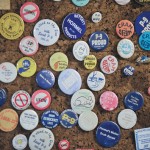 Buttons made and worn by the P-9 strikers adorn a section of wall where The United Support Group meets twice a week.

they never imagined the strike would play out as it did — with Hormel bringing in replacement workers, the Local 9 self-destructing as workers crossed the picket line and ultimately with strikers being annexed by their larger international union. More than that, the strikers were not prepared to wait for years on a callback list after the strike was called off because their jobs had been filled.

“Where have you seen that in history — that you had to wait a year, two years, three to go back to work after a strike?” said Gorman, who was offered his job back — minus the time he logged as an apprentice — six years after the strike.

Gorman, who made ends meet in the interim while his wife worked as a nurse and he a welder, could not bring himself to go back to the plant.

Bob Taylor, who had worked in the hog cut for almost 30 years, had three of his five children out of his home — which he had just paid off — at the time of the walk-out.

He explained: “I didn’t know it’d be the end. I got a job at Fleet Farm in Rochester … But we’re still proud of what we did.”

Judy Himle said that though many community members continue to ask them to give up the ghost, they will not forget what they stood for. In fact, many women of The United Support Group continue to support other labor movements.

Carol King, whose husband Dave worked as a Hormel machinist for 37 years, said part of the reason The United Support Group is holding the event is to continue to back the strikers so many years later.

“I’ve always felt the support group saved a lot of people — there were divorces, depression … and we were just all there for each other and we still are,” said King, who sold her family’s custom-built home during the strike and borrowed $20,000 from their savings to help put their daughter through medical school.

Pete Rachleff, a labor activist and historian who was elected chairperson of the Twin Cities P-9 Support Committee during the strike, will speak Saturday about the future of labor issues, and what can be learned from the strike.

“The strike happened at a critical historical moment in the 1980s,” Rachleff said in an interview Tuesday. “Labor relations were changing, not just at Hormel or in Austin, but the economic values that were held since World War II into the 70s were shifting nationwide.”

“This is the 25th anniversary, from my perspective, of a war … that won the hearts and minds of millions of people. Maybe not as much locally … but in the Twin Cities and nationally, people came together and sent food and money to these families who were without work,” Rogers said Tuesday.

Rogers said he will talk a bit about a divisive culture that some say has plagued Austin since the strike — meaning both the severed ties between those on both sides of the strike, as well as the distance between longtime Austin residents and new immigrant workers.

Members of The United Support Group said that division was recently evidenced by community members suggesting that a strike anniversary event should not be held, that the town needs to move on.

Richard Knowlton, who was Hormel’s CEO during the 1985 strike, did not respond to requests to be interviewed for an accompanying article. Requests were fielded by a Hormel Foundation administrative assistant.

More stories on the 25th anniversary of the Hormel strike

Larsons are ‘Farm Family of the Year’

Ever since he was 8 years old, Larry Larson knew he wanted to do just three things in life: farm,... read more