Planned apartments a project of teamwork 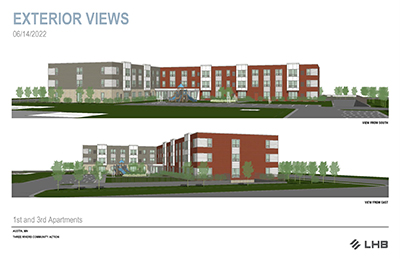 Austin’s newest proposed apartment complex got a huge boost forward last month when it was announced that it was one of several projects statewide that would receive funding from Minnesota Housing.

Three Rivers Community Action’s 1st & 3rd Apartments project, which will be built on property adjacent to the Post Office and purchased by the Austin MN Housing & Redevelopment Authority, was one of nine similar projects in greater Minnesota to be designated for money.

“The project isn’t possible without it,” said Lea Hall, Community Development Director for Three Rivers. “It makes it so we have private equity investment coming in.”

It also firms up the timetable a little more for the estimated $16 million project. Hall said the hope is for construction to start in the summer of this year with another 12 to 14 months needed for completion.

Leases could start in late 2024 for the 40-unit complex aimed at moderate-level pricing.

1st & 3rd Apartments marks the second project for Three Rivers in Austin. The first was Fox Pointe Townhomes, located in the 800 block of 23rd Avenue NW. It is also one of three other projects the Zumbrota-based company is currently developing in Lake City and Northfield.

Units start at around $775 for a one-bedroom apartment and will range to around $1,250 for a four-bedroom unit. 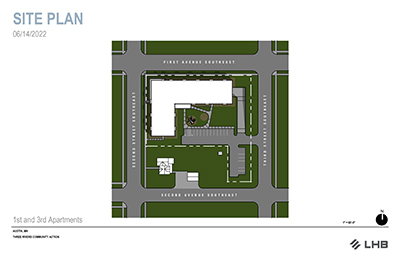 The project as a whole will help alleviate housing stress seen not only in Austin but statewide as cities grapple with ways to answer the housing crunch.

“This is a statewide issue and especially in rural communities,” Hall said. “You have some manufacturing industries and Main Street workers and a lot of these jobs are paying what I would call moderate wages. They really are moderate income workers. It is statewide.”

Austin has been actively searching for answers to housing within the community, earmarking it as one of the biggest challenges to date.

While it helps, HRA Director Taggert Medgaarden said this is just a first step.

“It’s been great for the community. We’re just going to try to add to the housing stock,” Medgaarden said. “We need housing in all aspects, whether that’s senior housing, affordable housing, higher-end housing — we need it all. Whatever we can do to check those boxes we’re going to do.”

The complex is especially promising due to location, giving people easy access to downtown.

“Anytime you get services; when you’re dealing with low to moderate families, some of the biggest challenges in transportation,” Medgaarden said. “It’s near downtown, it’s near everything.”

What the project has done more than most things, however, is highlight a template on how a city and development can come together to make housing like this possible.

While Three Rivers owns the complex, Hall said it was the groundwork put in by Austin and the area that allowed a foothold in the community.

“They were the ones helping us work with us, working with the Hormel Foundation, to orchestrate the project,” Hall said. “They paved the way for us.”

Fox Pointe is also a reason Three Rivers was able to help secure funding from Minnesota Housing. It showed what good development looked like.

“The key as to why Austin came out on top really is the city and HRA’s ability to come up with local resources,” Hall said. “I think that really helped us for sure locally. That was one thing we heard out of the gate. We really liked this project, can we do another one?”

It’s a partnership that Medgaarden hopes partnerships like this continue.

Mower County has also contribute money to the project to the tune of $250,000 under the auspices of it being a support housing unit project.

“I think this is a huge step in the right direction,” Medgaarden said, highlighting the many partnerships that made this project happen. “I think the biggest thing is thank you to Three Rivers because obviously this project was supposed to be a year sooner. Originally they were looking at the YMCA site. Thank you to Three Rivers for sticking with us to try and find a location.”