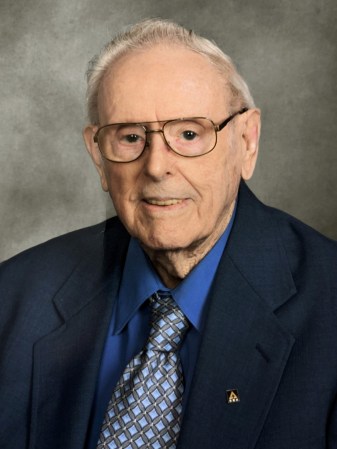 Lamen Stuart Johnson, age 96, of Austin, Minnesota, died on Friday, December 30, 2022, at Mayo Clinic Health System Austin. Lamen was born on October 25, 1926, in Mower County to Henry and Bena (Knutson) Johnson. He was confirmed at Trinity Lutheran Church in Hayfield, Minnesota and attended school in the Hayfield area until eighth grade. At that time, he stayed home to help on his family farm while his older brother served in the war. Lamen married Janice Holtan in Hayfield on September 14, 1946. The couple celebrated their 70th wedding anniversary in 2016. Lamen had a long career at Weyerhaeuser Company in Austin, Minnesota. He served many years as the Chairman of Local P9 at Weyerhaeuser, where he fought vigilantly to improve the working conditions and benefits of the people he served. Lamen believed in honesty, fairness, and integrity. He expected those same virtues in his family, friends and anyone he dealt with.

In addition to his regular job, Lamen enjoyed crop farming and raising livestock at his parents’ farm east of Hayfield in the 60’s and early 70’s. Lamen was an avid coin collector and belonged to the Rochester Coin Club. He was a member of the VFW and participated in Father of the Vet activities there. Lamen was a member of St. Olaf Lutheran Church in Austin. He loved to vacation at Cass Lake, Leech Lake, and Ottertail Lake, hunt near Yucatan, MN, and attend Twins Baseball games (especially double headers!). He was proud of his Norwegian ancestry and enjoyed learning about and sharing his heritage. In his last few years, he especially enjoyed visiting with his family and Culver’s meals.

Lamen was preceded in death by his parents; brother, Gordon; sister, Hazel Wyatt; granddaughter, Rebecca Bergstrom; and his wife, Janice in 2020.

A funeral service will be held at 11:00 a.m. on Thursday, January 5, 2023, at St. Olaf Lutheran Church in Austin. Visitation will take place one hour prior to the service. Interment will be in Fairview Cemetery, Hayfield, Minnesota. Worlein Funeral Home of Austin is assisting the family with arrangements. Condolences may be expressed to the family online at www.worlein.com.